Bill Guerin And The Journeyman

Share All sharing options for: Bill Guerin And The Journeyman 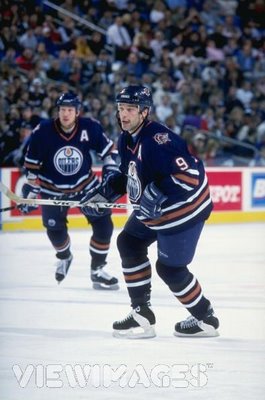 Brian Coe, who writes for the official AHL website, had a nice piece today on Bill Guerin. He talked to Todd Reirden, the new head coach of the Wilkes-Barre/Scranton Penguins, about the Penguins acquisition of Bill Guerin.

Reirden has quite a few connections to the Oilers - in fact, he and Guerin were teammates in Edmonton. Reirden also hired Chris Cichocki, the former coach of the Stockton Thunder, as his assistant when he took over from Dan Bylsma in Wilkes-Barre/Scranton.

In any case, the story he shared with Coe was about his first game as an Oiler, a debut he made at 27 years of age after being long since written off as a minor-league journeyman. Bill Guerin grabbed the puck for him at the end of the game:

"[Guerin] grabbed the puck," he recalled. "Most times when someone plays his first game it’s ‘Congratulations on your first game,’ and he throws you the puck. But I’ll never forget the comments that he made.

"He took his time, said ‘Everyone stop getting undressed. I want to point something out that occurred today. There’s this guy that battled for the last four or five years to prove people wrong to get his chance to play in the National Hockey League. I just want to make sure that everyone understands that this guy has earned every bit of the chance he got tonight. I want to present him with this NHL game puck.’"

I don't usually highlight this sort of story, but I feel much the same way that Guerin did about the guys who play a long time in the minors. I always pull for the Toby Peterson's, Bryan Helmer's, and Allan Rourke's of the world. It's a long road, and it's nice to see the journey bear results, however briefly.