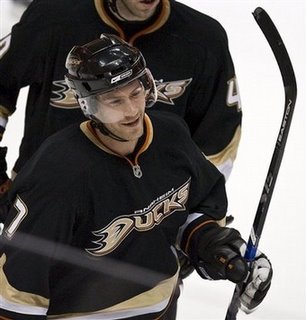 I’ve long suspected that NHL coaches and GM’s place far too much emphasis on the games a player plays against their own team. Either Tyler at Mc79hockey.com or Vic at IOF suggested that Daniel Tjarnqvist was acquired largely because he played the tough matchups against Edmonton.

I wonder if much the same thing happened today with Brendan Morrison. Morrison’s largely had an indifferent season, but I wondered if he’d played well in his games against Dallas, so I looked them up:

I’d be very surprised if Les Jackson, Brett Hull, and Dave Tippett didn’t draw on Morrison’s performance against the Stars this season when deciding to claim him on waivers.