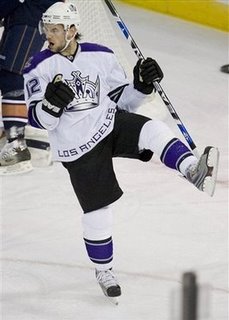 In my post below, I mentioned the theory (again, not my own although I subscribe to it) that general managers probably place too much weight on their own viewings of the players in question.

I decided to explore the Oilers' additions under this light. Naturally, Ales Kotalik hasn't played much in Edmonton over the past two seasons (he scored 2 assists in Buffalo's 10-goal drubbing earlier this year), but Patrick O'Sullivan has. He are O'Sullivan's numbers against the Oilers from the past two seasons (I thought about using his numbers vs. the Canucks for 2007-08, but Tambellini's staff as a whole probably have a greater influence than him individually, given that Kevin Lowe is still his boss):