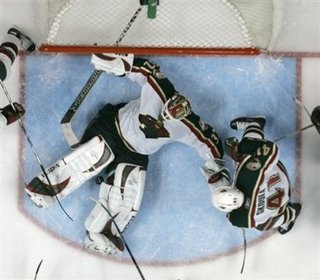 As per TSN, the Minnesota Wild have re-signed Niklas Backstrom to a four-year, 24 million dollar contract extension.

There was no doubt that they needed to do something with Backstrom, but I think they may have made a mistake. Backstrom is of course a superb goaltender, but he probably isn't one of the elite tenders in the league. His numbers have almost certianly been artificially inflated by playing in Minnesota. Consider the SV% numbers for Minnesota's goaltenders over the past six seasons:

Yes, all these guys are good goaltenders, but nobody who has played more than one game has a save percentage lower than 21-year old Josh Harding's .904, recorded over three games.

Minnesota plays the most stringent defensive system of any team in hockey, and today Niklas Backstrom benefitted to the tune of 24 million dollars.

Not that it's bad news for Oilers fans, but there may be even more good news - it seems pretty likely that Josh Harding, another good not great young goaltender, should be available via trade. Why the Wild didn't trade Backstrom for a premium and play Harding and a capable 1A type (Roloson, Fernandez, Labarbera, etc.) next season is beyond me.