Another Day, Another Bettman Point

Share All sharing options for: Another Day, Another Bettman Point 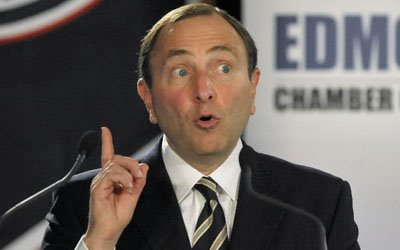 Ooohhh!! A point! Big whoop! I know exactly how you feel, Gary.

In fact there are too damn many of your points floating around these days. In the last week the Oilers have accrued 3 of them, in consecutive overtime losses to Montreal, Atlanta and Colorado. But that's just the tip of the iceberg; in those same 5 days Tuesday-Saturday, fully half -- 21 of 42 -- NHL games awarded the bogus, er bonus point that gets awarded jointly to any two teams which can't decide a game in regulation. It's the most cockamamie system imaginable.

Of course it’s in a team’s best interest to win their games in regulation, but a club prone to playing a lot of close games – which is the vast majority of them – is better served by playing conservatively and going for overtime. A late game-deciding goal has far greater negative impact on the team allowing it than positive for the team scoring it. Assuming that Bettman points are split 50/50, which of course they are on a league-wide basis, every regulation tie is worth an average of 1.5 points. The law of averages dictates that the late GA means the loss of those 1.5 points, the late GF gains just 0.5. Might as well wait for overtime and go for it then, with your 1 point assured if you fail but full value for a victory given if you succeed.

This system does nothing less than compromise the competitive integrity of the game. If that sounds like a serious charge, it is. When two teams and their coaches reach an in-game situation where the score on the board serves both their interests for the time being, the system is broken.
Gary Bettman and his cronies have failed in their fiduciary capacity as stewards of the game, and the shambles that their gimmicks have made of the standings, the record books, and the very games being played in front of their paying customers cannot be undone.

Interesting to look at the cumulative standings of all NHL teams over the past ten seasons.

For perspective it begins with the last year of standings sanity, where all games were worth the same two points and teams by definition played .500 hockey against themselves. But in 1999 that changed with the introduction of the Bettman point, awarded to teams that lost games in overtime (or to teams that won them in OT, depending on your interpretation). The idea, or so it was explained at the time, was that teams were playing too conservatively in overtime, hanging on to their one point. A win for the winner, a tie for the loser will put an end to that.

Overtime indeed became more wide-open; the percentage of games actually decided in OT doubled from 24.7% in 1997-98 to 49.7% in 2002-03. How much of that was due to the Bettman Point and how much to the 4-on-4 format that was introduced at the same time cannot be disentangled. The heavy cost, however, was that instead of hanging on in overtime for their one point, coaches started to do so in regulation, often for entire third periods at a time or even longer. And given the "new math" of Gary Bettman’s NHL, frequently both teams would be doing so simultaneously, cuz it was in both their interests. Coaches ain't stupid, and most of them passed Grade 6 arithmetic.

After the lockout – another blight on the historical and statistical continuity of the sport, and the second such which happened on Gary Bettman’s watch – the powers-that-be went a step further and brought in the shootout, thus ensuring that the third point would now be awarded in every game that reached overtime, not just the half or so of them that resulted in an overtime goal. Thus the value of a regulation tie soared from 1 point pre-1983, to an average of 1.00 points during the 15 years that decided overtimes split the points 2-0 and undecided OTs 1-1, to almost 1.25 points during the first variation of the Bettman Point, all the way to 1.50 points in the shootout era.

The results can be seen in the blocks above, which show the league winning percentage jumping in two discrete steps from its natural .500 (1917-99) to about .528 (1999-2004) to about .557 (2005-2009). Key word: "about", as the median, once a reliable constant, now fluctuates from season to season, indeed from day to day. In past seasons I have tracked this median figure and observed a general upward slope; as the playoffs approach and the points become more dear, OT games become more common. Last year for example, I divided the season into 5 * 246-game segments:

While Bettman & Co. delivered on one part of their promise, no more tie results, in reality there are more tie games than ever.

The above list takes a sample once per decade, and annually during the Bettman Point era. Pre-1942 I don’t have a reliable source of info on OT results, so don't have a handle on what percentage of games were tied after regulation. Following the elimination of regular season OT due to wartime travel restrictions right through 1983 all games were 60 minutes and a tie was a tie, splitting the (two) points. Roughly 18% of all games ended in ties.
After 1983 the 5-minute overtime started to prune the number of tie results down, even as the number of games tied after 60 rose to about 20% during the dead puck era. But in 1999, the Bettman point was introduced and the number of regulation ties surged to new highs. It has remained high ever since, with the last 9 seasons yielding the 9 highest percentages of the entire sample, with 22-26% of games tied through 60 minutes every season.
***

That extended rant aside, the rules are the rules, and the teams must play within them. How do they apply to the Oilers?

Recent results suggest that the Bettman Point (a.k.a. the "loser point") has saved the Oilers from what could/should have been a major pratfall in the standings. 1-1-4 = 6 points is much less painful than 1-5, 2 points would be. Getting to overtime has saved our bacon.

It’s what we have done when we get there that is disturbing. The play-for-OT strategy only really works if you can win at least your share of overtime sessions and/or shootouts. I would argue that it’s the "winner point" that is the true Bettman Point, the two points for regulation having been split in the traditional manner of a tie and now only the third, free lunch point that’s up for grabs and awarded to the winner of the mini-game. It’s here where the Oilers have been an epic fail, playing under 11 minutes of overtime the last two weeks and being outscored 4-0. Four goals against in half a period. Yuck.

The Oilers have been outshot in each one of those overtimes and cumaltively by a 9-2 count, so clearly something is amiss. One can start with goaltending: 4 GA on 9 shots is just brutal. Makes one wonder if tired goalie syndrome is likely to manifest itself at the end of a long, tense night. This past week Roli posted a Sv% of .902 in regulation, but only .500 in OT over the three games which included two decidedly weak goals through the 5-hole. Ugh-ly. That said, a team which took two penalties in overtime and couldn't kill either one, allowed one clear breakaway in the dying seconds, and which failed to backcheck effectively (if at all) in their most recent defeat, can't just lay it all on the goaltender.
So the Oilers crawl up the standings, one painful point at a time. Across the league, teams earn on average something over 1.11 points per GP in the Second Bettman Point Era, an average which surged to 1.25 during this recent outbreak of OT affairs. So 1 point a night is the equivalent of hanging on by our fingernails but gradually sliding away. We gotta win some games.