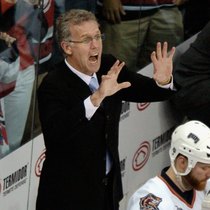 No, Craig, they didn't get 10 this time. Then again, neither did you.

***
I have offered to assist in David Staples' latest project over at Cult of Hockey, namely to grade the Oilers' players on a game-by-game basis. This is a collective effort, I'm just one member of a team of markers.
The scoring system is as follows: 10, perfect game; 9, extraordinary game; 8, great game; 7, good game; 6, above average game; 5, average game; 4, below average game; 3, bad game; 2, terrible game; 1, trade this player or send him to the minors.
***


This was one of those games where I looked at the schedule and pretty much got out my pen to write in "Loss". The schedule maker has once again done the Oilers no favours, with not just another three-in-four-days run, but the most compressed possible version of that: Thursday night - Saturday afternoon - Sunday afternoon. Detroit won their last to end a 5-game losing streak, and weren’t about to let their foot off the gas against a tired, hurting, and frankly inferior opponent.

That said it would have been nice if the Oilers had showed up for the first period.

Ladislav Smid – 3: Was floating around as if he was lost out there at times, which he probably was given Craig MacTavish had him playing with Jason Strudwick at times, Theo Peckham at times, and a couple of shifts on LW just for auld lang syne. I thought MacT had learned that lesson. Did record a rare assist but still ended up -2 on the day.

Robert Nilsson – 5: Made one great rush to set up Pouliot’s goal that temporarily closed the gap to 6-3, otherwise didn’t get much done.

Andrew Cogliano – 5: Wasn’t on the ice for any goals, either for or against. Not much of anything happened with Cogs out there in fact, just 1 scoring opportunity for the Oilers in 16 minutes work including 2:48 on the PP.

Ethan Moreau – 6: Same as his linemate Cogs, scoreless hockey in almost a full period’s work (19:40), including a clean sheet in over 4:00 on the PK. 3 shots, 2 hits, and made Zetterberg pay for a late whack at Roli. One of the few Oilers who wanted to compete.

Erik Cole – 4: Fought the puck all afternoon. Had a shift on LW early (with Pouliot and Stortini) and sure enough the puck wound up in our net. I thought MacT had learned that lesson early in the season.

Dwayne Roloson – 2: I was shocked he got the start, given the tight schedule and the fact that tomorrow’s game against a divisional/playoff race rival seems both more winnable and more important. Roli had a terrible time, taking a selfish penalty in the first minute and then was unable to come up with the save that would kill it off. Never came up with any saves in fact. In last two starts against Detroit has been torched for 8 goals against in just 30 minutes work.

Denis Grebeshkov – 6: The best of a bad lot of Oilers defencemen. Had a fine third period (+3) which negated some of the bad stuff that happened earlier (2 EV GA, 2 PP GA). Was soft on Datsyuk on the 5-0 goal, but also made some good defensive plays. +10/-8 in EV scoring chances, leading the team in both categories. High event game.

Jeff Deslauriers – 5: Looked great compared to Roli, but at the end of the day allowed 3 goals on 19 shots over 40 minutes. That’s 4.50, .842 for those keeping score at home. Still, looked aggressive and confident, a nice bounce back from the debacle against Buffalo. Gives MacT something to think about for tomorrow.

Jason Strudwick – 3: A tough afternoon. +1/-6 in EV scoring chances, -2 on the scoreboard, no hits or blocked shots. Seemed a step behind. Had the worst Corsi rating on the team at -10.

Sheldon Souray – 5: A team-leading 22:28 including over 9 minutes on special teams, and was only on for Leino’s 8-3 goal in garbage time. 3 shots, 3 hits. Oilers only generated 1 chance on 3 powerplays though.

Zack Stortini – 6: A rare high-event game, with 1-1-2, but on the ice for 3 goals against. Was only slightly culpable on Lebda’s goal when he let Lebda go to Pouliot and picked up the trailer, and truly unlucky when he came on on a line change while Samuelsson was already on his breakaway that made it 7-3. Co-led the team with 3 hits and impressed with a diving shot block followed by a second dive to clear the zone with the score 8-3. Doesn’t know the meaning of quit, which kind of stood out today.

Theo Peckham – 2: Didn’t look like an NHL defenceman. Was badly burned on Cleary’s goal when he got sucked into chasing Zetterberg off the draw and abandoned his post for Cleary to walk into. Why Peckham was on for a defensive zone faceoff against Datsyuk and Zetterberg is anybody’s guess. -2 in just 7:25, now is -4 on the season in under 20 minutes work. If this is our most NHL-ready blueliner on the farm, uh oh.

Kyle Brodziak – 4: Weird game. 3 shots, 3 blocks, but lost the draw on Cleary’s goal, lost his position on Hossa’s PP marker, and lost the puck on Datsyuk’s marker when he froze in the neutral zone allowing Zetterberg to pick his pocket. Just 7-10, 41% in the circle on a day the Oil got burned on faceoffs, with Detroit scoring soon after draws in the offensive zone, defensive zone, and centre ice.

Tom Gilbert – 6: Decent performance, esp. given the bad back. +9/-5 by the scoring chance metric, best on the squad, although not nearly so successful on the PK. 3 hits.

Marc Pouliot – 5: A high event game, despite playing 3 minutes less than any other forward. Played just 2:20 in the third but posted 1-1-2 and an even rating, as he was also on for 2 goals against in that brief time. Scored on his only shot, a very nice shelf job on Nilsson’s feed, but didn’t really stand out with skating or physical play. Was badly burned by Lebda on the 2-0 goal. His grip on an NHL job may be slipping.

Ales Hemsky – 3: A third consecutive poor game for Ales, who was outchanced badly again, +3/-8 (+7/-24 this week). Got nothing going offensively including "his" powerplay which sputtered badly. Had a well deserved -2 for his efforts.

Liam Reddox – 3: Got burned on both Detroit PP goals, allowing Rafalski to walk off the point for the opening goal and was also out of position for Hossa’s game winner. Finished the night with a terrible clearing pass that led to Leino’s 8-3 goal.

Sam Gagner – 4: Led Oilers forwards in TOI for the second time this week but didn’t have anything to show for it with just 1 shot. Was Oilers’ best in the faceoff circle at a modest 9-8, 53%. Docked a full mark for his absolutely brutal giveaway to Samuelsson that led directly to the unassisted 7-3 goal. Oilers were making a line change at the time, and the cross-ice pass was a poor decision, poorly executed.

Craig MacTavish – 1: Likely the coach’s worst game of the season. Questionable decisions abounded – Roloson starting, Peckham out for a D-zone draw against Datsyuk and Zetterberg, Smid on LW, Cole on LW. His team wasn’t ready to play, but given these examples all occurred in the first period, one could argue MacT wasn’t ready either.