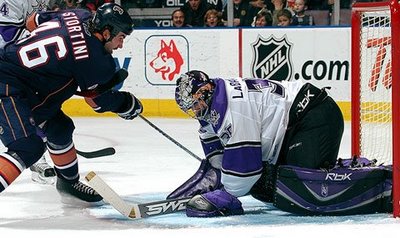 Of all the numbers that seep into my life, from recreational mathematics to classical astronomy to baseball and hockey statistics, one of my favourite diversions is the field of small number statistics. One can find all sorts of interesting and extreme examples and draw all sorts of bizarre conclusions just for the fun of it. The key is not only sample size, but choosing exactly where to constrain that sample.

Here's an example that is entirely current and factually correct. There are even some grains of meaning to be found therein.


The Oilers have had to change their game since the unfortunate loss of their slick puckmoving defencemen, first Lubomir Visnovsky followed all too quickly by Denis Grebeshkov. Suddenly a defence crew that provided four of the club's top eight scorers was a double amputee in the manner of the Black Knight. Just as suddenly, the onus fell much more squarely on the shoulders of the forwards to light the lamp.

The Oilers have played 7 games since Lubo went down, 6 of them on the road, and have posted an impressive 4-2-1 W-L-L record. The club has scored a creditable 20 goals in those games, even without counting a pair of ersatz shootout "goals". Here is the distribution of goal scorers over that span: 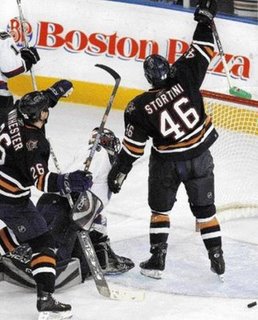 For the love of mike, there's Zack Stortini leading the Oilers in goal scoring. Who knew?

I care more about how the lines are faring as a group, not as much about who is finishing the job. The forward lines have been pretty stable over that period of games, even as the defence has been shuffled. Here's the goal scoring line by line:


The underlying numbers -- shots and Corsi data -- don't paint such a rosy picture of the grinders' performance, but shots don't tell the whole tale either. Last year much was made of the "unsustainable" shooting percentages that the Crosstiniaks maintained. Yet this year I look at the same data and there is Zack Stortini leading all non-Schremps with a team Sh% of 12.0% when he's on the ice, and leading all the non-SMacs in individual Sh% at an astonishing 28.6%. 4 goals in 14 shots, but still. As a unit those guys plainly don't waste a lot of shots, they try to bull it to the front of the net and when they succeed in getting it there a one-foot shot has a better than average chance of going in. Or so the small number statistics suggest. :)