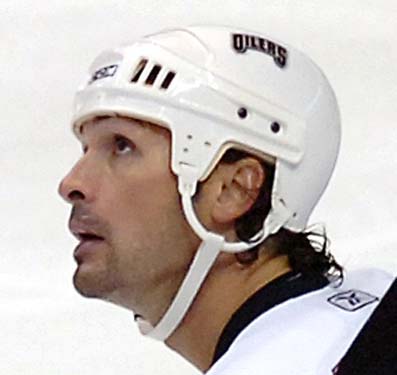 ***
I have offered to assist in David Staples' latest project over at Cult of Hockey, namely to grade the Oilers' players on a game-by-game basis. This is a collective effort, I'm just one member of a team of markers.
The scoring system is as follows: 10, perfect game; 9, extraordinary game; 8, great game; 7, good game; 6, above average game; 5, average game; 4, below average game; 3, bad game; 2, terrible game; 1, trade this player or send him to the minors.
***


Last night scared me as the sort of game the Oilers might be expected to win, and let get away on them. That has happened far too often this season, albeit mostly at home. In Arizona the Oil were up to the task, turning two powerplay goals and some staunch defending into a well-deserved 3-1 victory over the hungry Coyotes. The depleted defence, which had allowed 38+ shots in their previous three games, came up with a solid effort from top to bottom, holding the Desert Dogs to 29 shots including virtually nothing of the second shot variety. Dwayne Roloson, who somehow had delivered 5 standings points in those previous three games by stopping 113 of 118 shots, was again up to the task, stopping every shot but one.


Ladislav Smid - 6: I saw Ladi good in this one. He lugged the puck all night long and seems to quickly have found a chemistry with Gilbert, who can find Smid with an actual pass in his own zone rather than a suicide ring-around. Dennis had the scoring chances at +3/-8 during Ladi's 15 minutes of even-strength ice, but the shot clock was just at +6/-7 and I didn't notice the ice tilting the wrong way when the pair was out there. 1 shot, 1 hit, 2 blocks and nothing negative on the scoresheet. Took another tremendous wallop when clearing the puck from danger late in the third.


Shawn Horcoff - 8: Another quietly excellent game from our #1 centre. His 23:00 TOI led all forwards by over five minutes, finished the night 1-1-2, +1 with 2 shots, 2 takeaways, and 1 block. Split his game-high 26 face-offs 50/50, and actually won the draw very late in the second that ultimately resulted in Phoenix's lone goal. Was also on the ice for all three Oiler goals.


Robert Nilsson - 6: A strong game marred by a bad penalty and his inability to finish. Row-bert has his skating legs again, and his hands and head seem to be coming up to speed right along with them.


Andrew Cogliano - 5: Another nondescript game from the young speedster, who to my eye has his the doldrums the past little while. An uneventful 12:41 with no shots on goal, 2 misses, 1 hit, and an acceptable 4-4, 50% in the circle. Not a difference-maker either way.


Ethan Moreau - 4: A typical high-energy game with 6 attempted shots, 3 shots, 2 hits, and 2 more bonehead penalties 200 feet from Oilers' net. Particularly egregious was the first, an absolutely needless reach-in hook after turning the puck over on a 1-on-5 rush. The hook accomplished nothing, Moreau was headed for a change, but a hook it was, putting the Oilers 2 men down for a harrowing 85 seconds. Credit his teammates for killing it off, but Moreau's dumb play "should" have cost us a goal. Minutes later he was back in the box for a debatable running the goalie penalty, and this time the Coyotes struck for their only goal.


Steve Staios - 7: Has really stepped up into the big minutes role in the absence of Visnovsky and Grebeshkov. His 25:57 last night was second on either team, trailing only his partner Souray. Was on the ice for a team high 11 even-strength scopring chances, just 3 against, and also posted a respectable +3/-0 in just 1:25 of 2nd powerplay unit duty. 1 shot, 1 hit, and 2 blocked shots don't do numerical justice to a hard night in the trenches.


Erik Cole - 6: Played his best game in some time with 4 shots, a hit, 2 takeaways, and some some inspired penalty-killing. Also drew the penalty that resulted in the game-winning PPG. Nonetheless is mired in another extended scoring drought, just 1-1-2 in 14 games since his hat trick in Washington, and pointless in the last 9 outings.


Dustin Penner - 7: This guy is coming a lot closer to earning his $4 MM stipend in my view. Had another strong game with 3 shots, 2 hits, 1 block, led all forwards in scoring chances with +8/-3 at evens. Played a key role on both powerplay goals, bulling to the net to create a rebound for the first and then providing his usual heavy shade for Souray's point blast. I docked him a point for a bad penalty in the third, although I note it was actually in our zone while the other guys had the puck, which is more than we can say about Moreau's infractions.


Dwayne Roloson - 7: A solid night's work, marred only by a weak goal in the dying seconds of the second. Came up big in the first and third, especially with a big-time stop off of Lindstrom in the late going that helped seal the win. Had a strong night handling the puck and, it appeared, communicating with his defence.


Jason Strudwick - 7: His best game as an Oiler, at least as a blueliner. Oilers outchanced the Coyotes 6-4 with Struds on the ice at evens, 2-0 in a brief surprise stint on the powerplay, while holding Phoenix without a chance during 2:25 that Strudwick served on the PK unit. 1 shot on net, 4 hits, and 4 blocks testify to a hard night's work.


Sheldon Souray - 8: Had a great game, leading both teams with 26:35 including, it seemed, all the big minutes. With Horcoff, Staios, and Roli, killed the entire 85-second 3-on-5, much later played a 2:09 shift between Gilbert's penalty and Horcoff's empty netter. In between times, of course, he scored the game-winner on a trademark powerplay rocket that Tellqvist knew nothing about until he heard it hit the chain that connects the netting to the goalpost at a hundred miles an hour. Was physical from the game's first shift, where he roughed up Mueller, to the end where he twice showed Ed Jovanovski who was boss on this night. The only things that kept him from a 9 was a penalty, his inability to clear the puck under very heavy pressure late in the second (it would have been a great play if he had), and coming up empty in his three-for-a-dollar chances to hit the empty net.


Zack Stortini - 6: A solid night's work from Zorg in limited minutes, with 3 official hits in 5:32 and at least one crunching check that was missed by the scorers. Had a brief but successful bout with old rival Todd Fedoruk in which Zack held the upper fist, and to his credit, held it back. Crashed the net hard to create one decent scoring chance.


Theo Peckham - 6: Finished his own bout with my neighbour's buddy Steven Goertzen in a similar manner, in a position to hit a fallen opponent but not actually doing so. I liked how he went to bat for his goaltender there, and how fiercely he defended him generally (2 hits, 1 block), with a surprising +5/-4 on the scoring chance metric. Overcommitted a couple of times but was able to make the play in the prone position at least once. Lots of rough edges in this kid, and lots to like.


Kyle Brodziak - 6: Had a big night in the faceoff circle (11-5, 69%) including the critical last-minute 4v6 draw that ultimately led to Horcoff's empty netter. Strong game on the PK unit, but next to no offence.


Tom Gilbert - 7: A solid night with two assists, an unofficial helper on the third, and a great steal and pass that sent Nilsson in alone in the first. He like Smid was outchanced at evens (+4/-8) but I don't recall too many Grade A chances among those. Defied the law of physics by shooting a puck that was touching the boards directly over the glass for what could have been a killer penalty very late, but stepped out of the box to cause the turnover that led to the empty-netter.


Marc Pouliot - 5: Did he even play? Barely noticed the guy ... again. To be a little more fair, when he's on his game Poo tends to disappear out there, largely by doing a lot of little things right. But it's not a free smorg, he needs to bring a homemade dish to the pot luck. Whatever that is, it's heavily flavoured with vanilla.


Ales Hemsky - 7: Created at evens (+7/-3) and produced on the powerplay with a goal and a primary assist. Seems to be skating better after a poor stretch of games after the All-Star Break. Didn't particularly notice him on the defensive side of the puck, which is probably a good thing. Played just 16:04.


Liam Reddox - 6: Earned a bonus point for one third-period shift in which he nearly scored on a nice rush, then came back with a big shot block. 3 hits in just 7:50, and a solid effort thoughout.