Share All sharing options for: Hawks at Oilers backstory 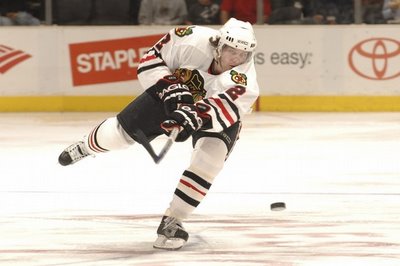 Am going to the game tonight, yahoo! Looking forward to seeing the Hawks, who rank up there with fellow Original Six revival act Boston and Washington as my favourite teams to watch. They also have the best unis in the league, be they the white, the red or the alternate black. Classic.

The Hawks are an extremely good even strength team. The club has 15 regulars with a Corsi/60 rating of +8 or higher (Oilers have 2, Hemsky and Penner). They have outshot their opposition by 132, and have done so with excellent efficiency numbers: a team Sh% of 8.2% and a Sv% of .931 for an excellent "PDO number" of 1.013. That’s quality and quantity, resulting in an outscoring machine (97-73 at even strength).

I knew this was a young club, but I didn’t realize how young until having a good look at their stats this morning. They have all kinds of experience between the pipes, but among the club’s 17 scorers just Brian Campbell (29), Martin Havlat and Patrick Sharp (both 27) are older than 25. The Hawks' young blueline is something to behold: the pairing of Duncan Keith (pictured; already +26 on top of last year’s +30) and Brent Seabrook (+15) is solid enough to warrant serious consideration as a tandem for the Vancouver Olympic team. Campbell and Cam Barker bring skating and skill, most often deployed with the Kane-Toews-Sharp trio. They have an embarrassment of riches of depth guys that currently sees 25-year-old Aaron Johnson in the pressbox, sitting on his 172 NHL GP, not to mention his +18 in just 26 GP with this talented Hawks squad.

Hawks also have a depth of young forwards far beyond the hyped Patrick Kane and Jonathan Toews, who have been living up to said hype by being, at age 20, the top two scorers on the club. This year they have another Calder candidate, Kris Versteeg, as well as developing youngsters David Bolland, Andrew Ladd, Troy Brouwer, and Dustin "Joe Bftsplk" Byfuglien, all of whom look mighty fine from this distance. I’m looking forward to seeing them up close.

Also looking forward to seeing the Oilers. I hope.

More after the game, I’m grading it for David Staples’ project. For now I’m running out the door to collect my tickets in the far corner of town.