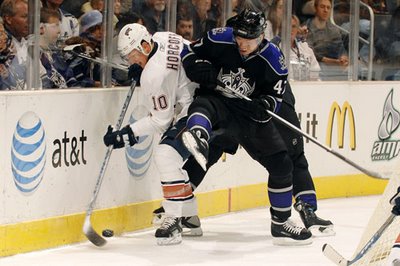 Break time is over, for the NHL and for me. Been a little quiet here on Oil Droppings the last couple of weeks, I went out of town for a few days and hit the doldrums on my return. I have been writing some, just not here. In particular, I've been helping out with Dennis's Scoring Chance project, on which I wrote a series of guest pieces over at MC79hockey. Lots of interesting stuff for Oiler fans in there; Dennis, with help from Vic and Scott, has compiled a ton of raw data on Our Heroes. My contribution was to parse by the familiar per-60 metric to provide another shade of context, and draw a few preliminary conclusions.

One of those conclusions was inescapable: Shawn Horcoff is an absolute horse. Horcoff is my favourite Oiler, but I don't write about him often because most (not all) in the part of the Oilogosphere I inhabit, appreciate him for the horse that he is. Still, the "new statistics" allow us to take the measure of a man in a much broader sense than was possible in the past. And the measure of Shawn Horcoff is that he is one hell of a hockey player.

My favourite not-that-new statistic is time on ice, something I clamoured for in vain throughout the 1980s. It was and remains a very good measure of a player's worth to his coach, to his team, and within the NHL, more reliable in its way than any production statistic or salary valuation. As a comparable it needs be applied with only the broadest brush, F v F, D v D, G v G. Accordingly all of the following is a discussion of forwards only.

Let's start with TOI for the top 6 Oiler forwards as at the break, expressed as a gross number and per game:

It is a very high workload indeed: Horc currently ranks 9th among NHL forwards in TOI; 8th in TOI/G. That left-hand column is astonishing: Horc has played over 200 minutes more than any teammate, the largest such margin anywhere in the league. Neither Ilya Kovalchuk nor Jarome Iginla nor Mikko Koivu nor Alex Ovechkin can boast such a spread. (Not that Shawn is one to boast.)

On a per-game basis, Ales Hemsky enters the picture, his 10 lost games ameliorated. Ales plays nearly as much time at evens, almost half a minute more on the PP, but doesn't kill penalties at all. Whereas Horcoff eats up major minutes on all three units:

Only one other forward in the league, Mikko Koivu, leads his team in ice time in all three manpower situations (although one of tonight's opponents, Buffalo's Derek Roy, comes close).

Questions have been raised as to whether Horcoff should be handling such a load on both special teams as well as the Power-vs-Power role as the first line centre, especially as he struggles with an aching back (from carrying the team?). Make no mistake, that load is exceptional:

I included the entire list of 20 guys in the league (I think I found them all) who log as many as 6 ST minutes a game, because it's quite a group of comparables. Who do their coaches rely on most? Guys one would expect for the most part, with a couple of surprises (to me) like Jason Pominville, Alexander Semin, and Staal the Youngest. But there's no bigger surprise than to see Shawn Horcoff leading the pack by a substantial 0:20 per game. Wow.

Horcoff is the only veteran centre on a club with four pivots under the age of 25 who have yet to figure out which of them is playing wing, let alone fully step into a tough minutes role. Marc Pouliot, Andrew Cogliano and Sam Gagner, first rounders all, are certainly developing, but they are a long ways from catching the 99th-overall selection (in '98!) who at 30 continues to grow and mature his game.

Some have questioned whether Horcoff might be overworked on special teams, and should be saved for even strength situations, where there can be no question about his ability to handle the load. Of the dozen Oiler forwards who have suited up for 20+ GP, Horcoff ranks first in QualComp at +0.07, third (behind Penner and Hemsky) in GF ON/60 at 2.87 and third, barely behind Pouliot and Gagner, in GA/60 at 2.14. The former probably speaks to extra duties such as own-zone faceoffs that he garners while Hemsky and Dustin Penner stay on the bench; whereas the latter is a very promising sign that the young guys in the protected minutes are learning their lessons well. Make no mistake, they are learning from a master of the two-way art.

The net result of quality play and quantity ice time is that Horcoff leads the Oil at +8. He also has the highest shot differential on the team at +341/-296 = +45, and the biggest scoring chance differential at +195/-169 = +26. This despite the fact that he started in his own zone a staggering 246 times, fully 45% of the team's defensive zone faceoffs, compared to "just" 184 times in the offensive zone. Enough good things happen during his shifts that by the time Horc leaves the ice the puck is more likely than not to be in the offensive zone (+177/-156 = +21) Using Vic Ferrari's measure he calls ZoneShift -- and I should use Vic's measure since I'm using his stats -- that puts Horcoff at an astonishing +83. I haven't checked but surely that is one of the best such ratings in the loop.

It's not just PvP either, cuz Hemsky has started 14 more faceoffs in the offensive zone than the defensive. To recap, that's Horcoff +62, Hemsky -14.

That Horcoff has been doing double duty in the faceoff circle can be seen in this stat:

So here's another stat specific to his position: in faceoffs taken, Shawn Horcoff is the #1 C (pronounced: "Number One Centre") in the NHfreakingL. Horc's no Rod Brind'Amour on the dot, but his percentage stacks up pretty darn well against the heavy-workload group. More importantly, his GA record suggests that even when he loses the draw he's hardly out of the play, and eventually the puck will start moving to the good end. The man makes a gigantic and still-understated contribution to his team. 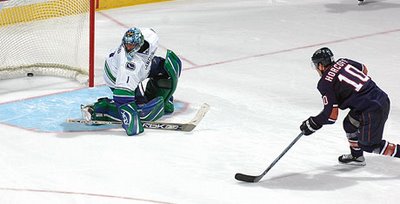