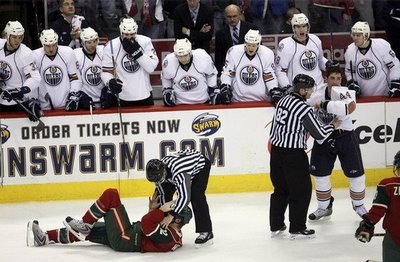 Can't help but wonder if Derek Boogaard might have Sheldon Souray in his sights. Last time out Sheldon decked Craig Weller with a very solid left -- too solid, according to some who noticed Souray was wearing a hard plastic wrist guard. He wears it legitimately to protect his bionic wrist, but it should be off limits as a weapon. Watched the incident a few times and never did draw a conclusion whether it was used as such. Weller is still out with concussion. Look at the shocked expressions of the Oilers on the bench surveying the aftermath of that beatdown.

Haven't heard of any stupid Bertuzzi-like comments emanating from the Wild, but I wouldn't be too surprised if the Boogey Man came calling. I don't doubt Souray might answer Boogaard's call, and he might have as good a chance against the monster as anybody; he's as tough a player as has worn Oiler silks in quite some time. I don't like the potential trade-off, or consequences, but there are times when the tough ones need to account for themselves, or be taken into account. I attended and remember well the "Bryan Marchment Game" where the former Oilers' hardrock defenceman, now a Shark, accepted the challenge of "Big Zhawrzh" Laraque after he took out Doug Weight's knee in a previous game. Marchment lost the fight (a little too quickly, I thought), but he gained the respect of the Oilers and even of this observer for answering the bell. Didn't hurt his teammates morale any, either. Cheap shot artist he was, but Matt Cooke he wasn't.
***

In a not-unrelated development, it sounds like Steve MacIntyre is in tonight, and Zack Stortini out. Neither has dropped the gloves since their return from injury, which is somewhat significant in that both injuries came during fights. Tough break for Zorg who was one of approximately 20 Oilers who struggled against Buffalo. In his first game back from a leg injury, he didn't exactly have the wheels going and showed a little rust by making a couple of rare bad decisions. And like the team as a whole, every mistake wound up in the net.
***

Craig MacTavish's proposed experiment with Tom Gilbert up front on the PP is a little different. It's not often one sees three full-fledged defencemen on the PP; I know Jacques Martin used to fool around with Zdeno Chara in the low slot from time to time, but I believe Alfie played the point so they were just kind of switching positions. Other teams have tried a similar tactic but not for long. Last team I remember who used three D on a regular basis, and about the only one who used the swing man in a skill role was the Winnipeg Jets in the early 90s. They had traded Dale Hawerchuk for Phil Housley, and with a surfeit of offensive blueliners (Fredrik Olausson, Teppo Numminen, Randy Carlyle, Moe Mantha) to man the points, Housley was regularly deployed up front, where he scored 12 and 11 ppg his first two seasons. A precocious offensive talent, Housley had played some centre early in his career in Buffalo (which also shows up in his powerplay goals) before maturing into a full-time blueliner. But for the Jets he went up front on the PP.

It worked in that the Jets had an above-average powerplay those two seasons, but it didn't in that their back-heavy talent distribution resulted in an unbalanced team with a losing record.
***

"I don't like Pouliot at centre. Faceoffs are an issue, the added positional responsibility can be an issue. (Potulny) is an average skater, but he's got good hands and a real head for the game, from what I've seen."

It's hard not to read part of that as a thinly-veiled criticism of Pouliot's head for the game. But in response to the specific criticism, I would point out that Pouliot's faceoff percentage of 47.6 is less than great, it's fully 10 percentage points better than that of Andrew Cogliano (37.5). So Cogs must have a big edge in "positional responsibility". I do know Pouliot has a pretty good record as a low event player regardless of whether he's playing centre or wing, currently ranking fourth among Oiler forwards at 2.30 GA ON/60, while Cogliano is well down the charts at 2.73. As for Potulny, I guess we'll find out.

Two things I'm pretty sure about are that Coach MacTavish has a v-e-r-y good understanding of what a 3C's positional responsibility is; and that he's pretty ticked to not have a veteran to deploy in that important role.
***

Big game tonight against a divisional rival that is exactly tied in the standings. GOILERS!