Share All sharing options for: Springfield Falcons’ Quality of Competition Through 40 Games 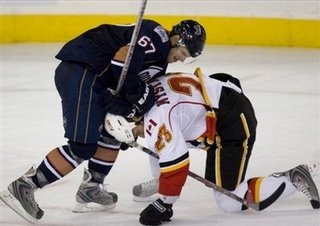 This is a continuation of a concept that I test-ran at the end of December – using the AHL website to test quality of competition. I didn’t get a ton of suggestions for improvement, so mostly I’ve gone with the previous format, except with one minor tweak: instead of three categories of player, I’ve expanded it to four. Previously, a "strong" opponent was classified as a player with .75 points per game or better. I’ve dropped this requirement to .66 points per game, based on the fact that the threshold for an AHL first-liner is generally about that point (based on the AHL scoring statistics for 2007-08). A second-tier opponent was classified as anyone with between .5 and .75 points per game; that’s now between .5 and .66 points per game, as based on the 2007-08 AHL scoring numbers. A third-tier player is one with between .33 and .5 points per game; this should help give some credit to scorers who face their opposition’s checking line. A player with below .33 points per game is considered a "weak" opponent.

A player receives the following number of points for an "event" against each class of player (for more on the methodology used, please refer to either of the posts linked above):

As previously, no value is given to events against the bottom-tier player. The points total is then divided by the number of events to give a value that should rank each player’s level of opponent. Without further ado, here are the Springfield rankings. Players with less than 21 events were excluded.

This list compares well to the one I did at the end of December; the only forward who moves more than four spots in the rankings is Gilbert Brule. This should be a more accurate list; it hasn’t made the leap from summing to differentiation (because that’s way too much work), but there are more points in the equation so the line should be more accurate. Jeff Truitt likes his checking line; the only AHL scorers here facing tough competition are Liam Reddox and Bryan Lerg.

Again, this list compares well with my previous one; the only defenseman making a significant move is Taylor Chorney. It makes sense, too – Chorney has a decent resume as far as prospects go, and if he’s going to post a -21 with marginal offense, he ought to have some help from nasty opponents.

As with last time, it may be worth getting a little bit excited about Theo Peckham, and Cody Wild (who is finally getting some playing time from the coach) is probably underrated as a prospect at this point.

I’m reasonably confident with this process for measuring Quality of Competition; Vic Ferrari was nice enough to run a comparison between it and the Behind the Net method and they had a very close correlation so we can probably view it as a safe guideline.