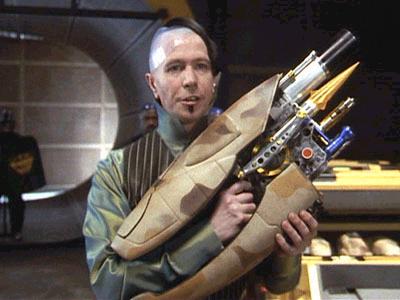 This is Zorg Stortini, hired gun of the Edmonton Oilers. He's a funny looking fellow whose contribution is often misunderstood and frequently underappreciated.
Zorg bleeds Oiler blue, yet is often badmouthed by fans of his own team. Just the other day, Oilogosphere stalwart Andy Grabia made the following drive-by analysis:

I can't take any team with Zach Stortini on it seriously. Or any organization that considers him a Top 12 forward. I just can't.

A while back, the esteemed Lowetide made the following comments in his early season report card:

30%: Zack Stortini- Well, we knew he wasn't going to have a season like last year but I thought he'd be more than Wilfredo Tejada. I don't think it's his fault, really. Giving Stortini at-bats when he clearly doesn't give you offense is like playing Bob Natal at first base: he can do it, but does it help you? You'd have to write a 4,000 word essay on how being purely physical overwhelms putting up even a dribble of offense with the minutes Zack is getting.

I think "incomplete" would be a much fairer mark than 30 frickin percent for a guy who has only received 70 minutes TOI. Hard to deliver
offence from the pressbox or the bench. ... Zack's track record is that the more regularly he plays, the better he plays. Instead, MacT screwed around with the Pisani at centre experiment at the expense of young players including Brodziak, Pouliot, and Stortini.

Zorg's season continued in fits and spurts until he was inserted into the line-up on Dec. 13 against Vancouver, a team he has driven crazy his whole career. Since then he has played 9 games in a row, with a total ice time of 64:30, or slightly over 7 minutes per. All but 7 seconds of that was at even strength.
Zorg is an interesting player to track in that any line he's on is by definition the fourth line. Just as the Hemsky Line is the first regardless of who the other guys on it may be, the same may be said about the Stortini Line at the other end of the roster. Not that there's anything wrong with that; a healthy fourth line is critical to a team's success in my view.

Right now the canary in the coal mine is alive and well. Check out these numbers for those 9 games:

For example, in those 9 games the Oilers landed a total of 128 hits. Stortini delivered fully 12.5% of those, in roughly 2.5% of the total individual ice time.
Let's look at that aspect of the game over the course of the season to date:

Then there's this one. A while back BCB made an insightful post in his blog Bringing Back the Glory about "aggressive" vs. "lazy" penalties. Accepting his definitions of what constitues each category (and there are some acknowledged gray areas), the Oilers as a team take about 2 lazy penalties for each aggressive one.

So far this season, Zorg leads the club with 87 PiM as befits his position description. In total he has taken 19 penalties, with the following breakdown: 19 aggressive penalties, 0 lazy penalties.
I would conclude here is a guy who understands what his job is. The vast majority of his penalties are coincidental of course, but the remainder are of the charging and roughing type, establishing a physical presence, standing up for teammates. Not a single obstruction foul for the entire season. It's kind of amazing when you think about it.
Heaven knows the Oilers, like all teams, need a physical presence. Indeed, Oilers have been branded a small, soft team. Zorg Stortini addresses a very major need on this club, and he does so while holding his own on the ice, by contributing a little bit and by giving away absolutely nothing. He can play in my Top 12 any day.