Share All sharing options for: Stars at Oilers backstory 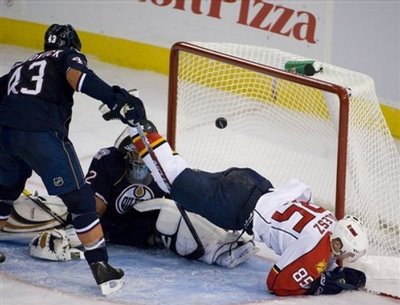 There's good news and there's good news, I'll let you decide which is which. The one is that I'm back from a rather more productive road trip than the Oilers had, and the other is that there are now officially rocks in my head.

Better still, the hockey gods have finally answered my regular entreaties and delivered me up a pair of tickets for tonight's Dallas at Edmonton game. So this pregame blurb will be rather short, but I'll have a game report in the comments or separate post much later on.

All this should have me in a good mood, and it does. Except for these odd nagging doubts. First and foremost among them is what has happened to our third defence pairing. Guys like Steve Staios and Jason Strudwick (pictured, with puck entering wrong net) are supposed to shore up the back end and give the team steady, solid service. But there is just no way of getting past numbers like these over the past 6 games:

Simply put, these guys are getting Owned, every game. Even before this: between them, they've had 15 minus games in the last 9 Oilers games.

Veteran defencemen like Staios and Strudwick aren't necessarily supposed to win you games, but they're not supposed to lose them either. Oilers have lost three of the last four by one goal, all in regulation. Those -1s look like lost standings points to me ... in fact, the difference between a regulation tie and a 1-goal loss is actually more like 1.5 points, assuming an equal distribution of Bettman points.

In the past 6 games it has only gotten much, much worse. Oil have been outscored 6-0 with Strudwick on the ice, and outshot 48-15. I haven't done the micromath but at his season's average of 12:37 ES TOI/GP that would be in about 75 minutes of action. Egads.

But wait a minute, you say, these guys kill penalties. True enough: over the last four games, Strudwick was twice on the ice for 2 PP GA, the one-goal losses against Detroit and Dallas. Over those four games, Strudwick has amassed 9:02 SH TOI during which time the opposition has scored those four goals. Again, for those who prefer per 60 metric, that's a cool -26.6 per hour over that short period of time.

Staios is barely better. he's been outshot 176-107 on the season and 43-19 over those 6 games. He's been on for 3 PPGA in 10:40 the last four games, including the ghastly game winner by Modano late in regulation in which Steady Steve seemed to be completely unaware of the concept of passing lanes and was frozen in the ice like a big ol' meteorite.

On the PP, and on offence generally, these two guys are a complete nonentity. When they're out there, the game gets played, badly, in their zone. The team shots differential on the season is -58. Staios is -69 and Strudwick -80; with these guys on the bench, the team is positive. That's insane.

But what's really insane is this. Ladislav Smid continues to rot in the press box with occasional opportunities to ferment up on the wing. Smid has been on the ice for exactly 1 ES GA all season. Yet MacT continues to show faith in his veterans (even though technically Smid is more of a MacT vet than the Oiler newcomer Strudwick is) who are routinely on the ice for an ESGA every game.

The last log on this particular fire is the fact Strudwick was advertised as a swing man, a guy who could move up and play wing when the situation required. If one of these guys needs to play up front for 4 or 5 minutes once in a while, I sure in heck would rather it was Strudwick. Better yet, I'd rather he was shipped direct to the press box for awhile. He has not been helping the hockey club for some weeks now.

Oh well, tonight I get the four-dimensional, live view. Hopefully that view will include a #5 and not a #43, but whoever, it's GOILERS!

Enjoy the game, everybody!