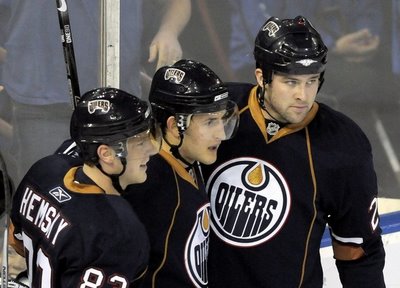 Over at the always-interesting and usually-civil Game Day Thread at Lowetide, yours truly has been happily eating crow about Ales Hemsky. In my defence I pointed out he really did turn the corner in early November -- about ten seconds after I published some critical remarks about Hemsky's early-season play -- but Ales has been rolling for the most part the last five weeks. As we all hoped he would.

But while I'll take the hit for being "wrong" about Hemsky over there, I think I will claim being "right" about something else in the safety of my own blog. All year long I’ve been saying the best LW for the Horcoff-Hemsky duo is one Dustin Penner, who happened to first join the line on Nov. 1 in Carolina, just as Ales was getting it together. (Coincidence? Or not?) Hemsky played real well in Carolina before finally breaking the goose egg with two spectacular goals in Philly on the 2nd and then going on a bit of a run. His linemates have changed from time to time, with Penner finding time in the dog house in between, but for the most part the 27-10-83 have played the lion's share of time as a unit.

As we first saw last Dec.-Jan., "Horpensky" have been a very effective combination, compiling some eye-popping shots data. Assuming (dangerously) that I have entered the Timeonice.com code correctly and understand the results, this tells a tale:

Then there's this from Hockeyanalysis.com (all numbers are GF/GA per 20):

It's important to realize that Hockeyanalysis uses strictly GF/GA, which by definition is a small sample size this early in the season. Penner has achieved better results on the scoreboard, both for and against, than either of his highly-rated linemates, but it's early. Using the larger data sets of shots and Corsi available courtesy Timeonice, both players had virtually identical numbers when apart, and both are hugely improved since they are together.

Indeed, the Horpensky unit has been dominant in recent games. Here are shots and Corsi data as well as traditional +/- for forwards over the last five games:

Note this five-game stretch began after the series against Corsi kings Detroit. It’ll be interesting to see how we stack up against the powerhouse Sharks tonight.

Speaking of which, it’s game on. Goilers!