The Most Interesting Thing I've Written in Some Time

Share All sharing options for: The Most Interesting Thing I've Written in Some Time

The official AHL website isn’t as easy to use as the NHL’s, but it does have some really interesting data. For example, looking back through the game scores, it allows us to see who was on the ice for every goal for and against. Now, this is a crude measure, but it should tell us what kind of opposition different players in Springfield are facing. 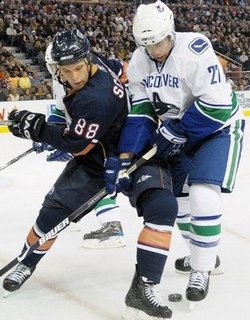 What I’ve done below is split the forwards that each Falcon played against into three categories: Strong, Medium and Weak. A "strong" player is anyone managing .75 points per game or more (Falcons who would qualify: Potulny, Schremp and Brule). A "medium" opponent is any forward averaging between .5 PPG and .75 PPG (Falcons: Trukhno, Lerg), while a "weak" opponent is anyone averaging less than .5 points per game. I’m welcome to suggestions; the idea here is just to see how good each player’s opposition is offensively.

To measure how often each Falcon sees this kind of player, we simply count each player on the ice for an event (goal for or against at even-strength). For example, on Sunday, Springfield played L.A.’s farm team, the Manchester Monarchs. O’Marra, Paukovich, Lefebvre, Young and Bina were on the ice for the first goal against, while Boyle, Martinez, Dravecky, Westgarth and Bagnall were on for Manchester. Each Falcon would have an event scored like this (Strong/Medium/Weak): 1/0/2. This is because Boyle (11pts in 13 GP) is considered a strong offensive player, while Dravecky (13pts in 33GP) and Westgarth (4pts in 30 GP) are considered "weak".

The sample sizes on a lot of these players are very small; obviously, this exercise tells us nothing about players like Kinley, Huddy or Gabinet, but even a player like Goulet could have generated 18 marks in only 6 goals for or against. In other words, these aren’t definitive rankings, and common sense should be applied freely. Still, it gives us a starting point for discussion.

Now, it would be nice to break down this chart from three numbers per player to one number per player. For this exercise, I’m going to value an event against a "strong" opponent as being worth 2 points, and against a medium opponent as being worth 1 point. Players receive no credit for being on the ice against a bottom-six AHL forward. That number is then divided by the total number of events to give us a ratio of strong players to weak players. Also, for simplicity’s sake, I’m going to cut out all players with 12 events (4 goals) or less. Here’s the new list, starting with the forwards: 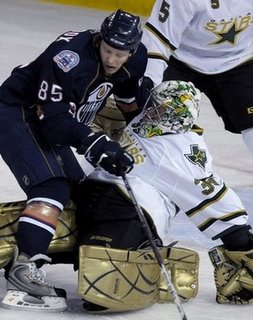 There are a few surprises here, but most of the list makes sense. Reddox and Sestito have both been called up to play a defensive role; it makes a ton of sense that they were deployed against the opposition’s best while in Springfield. Going down the list, there’s a nice group of veterans and players with solid two-way reputations, and at the tail end are players who have either a largely offensive game (Schremp) or are fringe AHL’ers (everybody else). The bad news here is that Schremp doesn’t appear to be generating his offense against tough AHL players; his results have been impressive but they’ve been coming against the soft parade, so it’s hard to imagine him playing against anything but the same in the NHL. The last thing worth commenting on is that Ryan O’Marra probably shouldn’t be on the radar anymore – he’s -6 with marginal offense, and it isn’t like he’s playing the toughs. 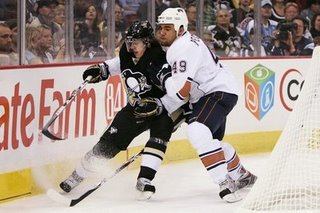 Theo Peckham’s position here is very encouraging. He’s been even (on a team nine games below .500) against the best the AHL has to offer, and added some offensive punch to boot, and those are very encouraging signs that he’ll be able to keep his head above water in third pairing NHL minutes next season. Josef Hrabal (even through 17 games) also looks much better by this metric. Of course, the big negative is that Taylor Chorney’s team-worst -21 looks even more miserable in context. Roy’s -14 and Bisaillon’s +2 are also worse by this metric.

Final note: if anyone has any suggestions for improving this metric, please chime in below.