It's the best game you can name

Share All sharing options for: It's the best game you can name 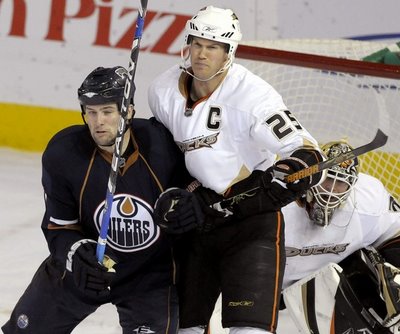 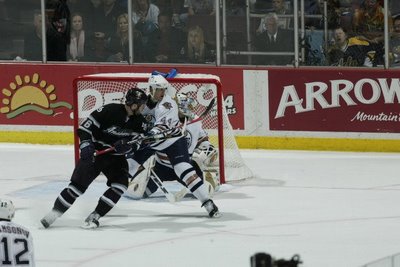 Friday night the call came about 20 minutes before the opening face-off. "Bruce, something's come up, would you like a pair of tickets to the game?" My son and I had been planning to go to a sports bar to chow down on chicken wings and watch the PPV broadcast, so the mid-course correction was relatively painless.

It's rare enough that I get the pleasure of attending a live game with my son. Kevin was just 5 and beginning Tom Thumb hockey in the fall of 1993 when I gave up my Oiler season tickets after 16 mostly wonderful seasons. I watched him play hundreds of games in the next dozen years, coached him in hundreds of practices. Kevin much prefers playing the game to watching it, but we usually make it out to at least one Oilers game a year, usually around his mid-December birthday. (He turned 21 this week) So the timing was perfect.

Except we were late. By the time we had driven, parked, walked, collected our tickets and found our seats -- Row 27, top of the circle of the Oilers attacking zone -- we'd missed about 8 minutes. Score was 0-0, and by the time I thought to check out the shot clock it stood at 10-1 Oilers. That shot clock would continue to mount in bursts for both teams in a penalty-filled, action-packed affair.

The opposition were the Anaheim Ducks, once Mighty, now just another team give or take Chris Pronger (pictured above battling Dustin Penner in good times and bad). A handful of fans booed half-heartedly whenever he handled the puck, but the venom that had run through the entire building the last time I'd seen him live (in "The Return of Chuckie" game) had now largely run its course.

If this game was any indication, so has Pronger himself. While leading both teams with over 33 minutes of ice time, he was mediocre at best, anchoring a defence that allowed 53 shots on goal, himself with the worst 5v5 shots differential on either team (-7), a goal differential of -1, and a game high 5 giveaways, while none of his 4 attempted shots on goal even reached the net. As one who has watched Pronger closely his entire career -- I picked him in my keeper league pool as an 18-year-old rookie in 1993 and have had him on my team ever since -- it was one of the least influential games I've ever seen him play. On this night at least, Ladi "Fifth Asset" Smid was better.

Pronger was sitting in the penalty box when the goose eggs were broken late in the first. Alas, rather than make him pay for his transgression, the Oil committed a couple of their own in allowing a brutal shorthanded goal against. Sam Gagner made a terrible blind back pass which led directly to the Brothers Niedermayer breaking loose on a 2-on-1. Robert Nilsson, hustling back to defend, broke stride just long enough to watch the initial shot, then arrived a split second too late at the edge of the crease to take Rob Niedermayer's stick on the juicy rebound. Later Nilsson would pay the price and spend the third period on the bench, while Gagner would, as usual, escape the wrath of his coach.

Bad went to worse early in the second as the Oilers started to run around and take penalties. Ducks barely missed on two tap-in opportunities on the first powerplay chance, peppered Roloson with shots in the second, before the weasel Corey Perry made the Oil pay for the third penalty with a nice deflection off a Bobby Ryan spinnarama. 2-0.

Minutes later the game began to turn the Oilers way when Smid absolutely clocked the hated Perry with a great open ice hit. While Perry went down and stayed down, Ryan Getzlaf came to challenge Smid for the clean hit. Ladi did not refuse the invitation, removing his shielded helmet and giving Getzlaf the "let's go" motion. A linesman intervened before the fight could materialize, but the Oilers were energized by Smid's big hit and subsequent refusal to back down. The following minutes featured a parade to the penalty box on both sides. The Oilers wound up taking 8 penalties in the period with only Smid's being coincidental. Disaster nearly occurred in the last minute when Ethan Moreau took his second silly slashing penalty of the period to put Oilers 2 men down, then couldn't resist beaking off to the ref and drawing an unsportsmanlike call. Three stupid penalties in one period -- call it the Ethan Moreau Hat Trick. Somehow Oilers survived the 5-on-3 and got to the buzzer still only down 2-0.

During the intermission we went down to the "club" section beneath the stands, where it seems one can get "clubbed" even worse for concession prices. We quickly thought better of parting with any cash, but Kevin wanted to watch the players walk out of the dressing room so we hung around. A surprising number of people had the same idea, including a few puck bunnies fully decked out in their Gagner and Hemsky jerseys (with many signatures on the numbers). The doors behind the hige silver Oilers logo opened, revealing five replica Stanley Cups at the end of the hall. Soon enough, the players clumped out, large as life and seeming larger in their skates and shoulder pads. Penner, Stortini, Smid, Souray ... these are large men. People called out words of encouragement but the local warriors kept their gazes fixed straight ahead on the task at hand.

By the time the ropes were lowered and we emerged into the bottom of the lower bowl the puck was being dropped, so we ducked down and sat on the steps immediately behind the Ducks bench. For two and a half exhilarating minutes the play whirled in front of us at a dizzying speed. At such a low angle it was difficult to follow the rapid movement of the puck through the constant shift of bodies, and I empathized anew with the plight of the goaltenders. Indeed, from our angle it was difficult to catch a glimpse of Roli in a high speed game of "Where's Waldo?" as he attempted to track the puck through the swirling maze. The powerplay continued at the far end, the puck zipping from stick to stick, suddenly a shot and the clang of a post behind Roloson, but no harm done. The zone was cleared, the play zipped in front of us for a second, and as Anaheim worked it back up the ice the simple line change was elevated into an art form as first one, then the other defenceman safely but warily made his way to the Ducks bench. Again the Ducks worked it deep and crashed the net, but as Roli went down the ref's arm went up and finally the whistle blew. Bobby Ryan -- who looks like a force to be reckoned with btw -- had been caught for the game's third goaltender interference penalty.

Rather than return to our seats Kevin and I found an empty pair of aisle seats about 15 rows above the Ducks blueline and enjoyed the rest of the game from there. We certainly chose the right end to sit in; the Oilers began to surge, and the tiring Ducks beat a steady path to the penalty box. The two-goal deficit seemed insurmountable with Jonas Hiller playing brilliantly in the Ducks goal, but finally there was a breakthrough from a most unexpected source.

The fourth line had been nailed to the bench with all the penalties, but just past the 6-minute mark Zack Stortini and Jason Strudwick took the ice for the first time in a full period. Within seconds Stortini ran Pronger with a clean bodycheck, forcing the play into Anaheim's zone. As Stortini charged towards the goal mouth a puck was shot into the melee, bouncing off Zack's skate and right onto the stick of Kyle Brodziak who buried it into the top corner. The crowd erupted in a frenzy, the shutout broken. A 23-second shift by the scrubs, and wouldn't you know but the Oilers were back in the game.

Minutes later the Ducks young star Ryan Getzlaf went off for interference, and seconds later their old star Scott Niedermayer joined him in the box for crosschecking Sam Gagner on an impressive burst to the goal. Surely even the Oilers couldn't blow a 2-man advantage for 1:51? Oh, of course they could, and they did, with lots of help from Hiller who made two tremendous stops off of patented Horcoff one-timers. The man's lateral motion is just sick. As Gagner lost a draw which frittered away the last seconds of the powerplay, the night's best hope seemed lost, only to be renewed when Mr. Kristi Yamaguchi (Bret Hedican) took yet another penalty for carelessly dumping the puck over the glass. I've seen enough hockey to realize this would be the one to burn the Ducks, and sure enough, within a few seconds the impromptu PP line of Pouliot, Gagner and Cole (9 goals among them on the season) had combined for the equalizer, as Cole batted a rebound out of mid-air and into the net to break a season-long drought at Rexall.

The Oilers continued to pour it on and the Ducks to hang on. Yet another penalty in the late minutes saw the Oilers peppering Hiller with shot after shot, 6 in all including three wicked slappers by Souray and two by Visnovsky. Hiller stared them down.

Again the buzzer sounded without resolution, so on to the shootout we went. The weasel Perry scored on a nifty deke on the first attempt, and that was all she wrote. Roloson made fine plays to thwart Getzlaf and Ryan to keep hope alive, but all three Oilers shooters made weak attempts and never threatened to score. Both Pouliot and Hemsky made slow-motion moves to the backhand and couldn't lift the puck into the tiny hole that may have been available up top. As the last shooter, "shootout specialist" Sam Gagner, approached the puck the crowd all rose from their seats. Alas, Sam wasn't up to the occasion, bobbling the puck right off the hop, altering both his flight path and his stickhandling confidence, and he fired weakly into Hiller's blocker to end with a whimper what had been a slambang affair.

Oilers have now won just 2 of their last 10 at home, an unacceptable streak at any point of any season. Once again their special teams had been their undoing: they won the even-strength game 1-0, held Anaheim to one PP goal in 8 attempts, but ruined it by scoring just 1 of 10 powerplays of their own while allowing the killer shortie against. The other "special team", the shootout squad, didn't deliver either.

Still, it was tough to complain. Even with the Bettman-era anticlimax the game was great, the price was right, and the time with my son was well spent. A highlight moment came in the second period when Kevin suddenly fixated on George Parros and his infamous moustache, which he labelled "right out of the '80s". ("Ouch!" I remembered) Right on cue Parros jumped over the blue line ahead of the play forcing an offside whistle. A couple rows below us a leatherlung hollered: "Hey Parros! Your moustache went offside!" You had to be there, but the timing was perfect, and Kevin laughed until the tears rolled. The good times rolled right along with them.