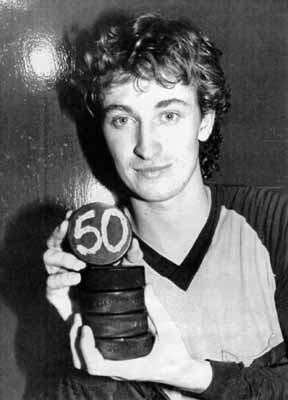 It was a magic time. If you didn't live through it, it's hard to comprehend what a record-breaking machine Wayne Gretzky was. He didn't just break records, he destroyed them with a flair for the dramatic. Examples:

-- On April 9, 1987, Gretzky started the night tied with Jean Beliveau for the most points in the Stanley Cup playoffs, 176. By night's end Gretzky had tied another playoff record, his own mark of 7 points in a playoff game, and was 7 points clear of Beliveau. Oilers beat the Kings 13-3, setting a couple of still-extant team records en route to their first victory in what became their third Stanley Cup.

-- On February 24, 1982, Gretzky broke Phil Esposito's record for goals in a season by scoring his 77th, 78th, and 79th goals in the last seven minutes of the third period. His natural hat trick blew open a 3-3 tie into a 6-3 Oiler celebration, and capped a streak of four consecutive five-point nights for the Great One as he relentlessly overcame Esposito's awesome record with six weeks to spare.

Of all the records, the most spectacular run had to be earlier in that 1981-82 season when Gretzky challenged and ultimately demolished the most fabled record in hockey, Rocket Richard's 50 goals in 50 games. The previous season the great Mike Bossy had equalled Richard's mark which had stood unchallenged for 35 seasons.

It was clear in the fall of '81 that Gretzky had the mark in his sights. After a run of 7 goals in 7 periods in late November, including his second four-goal game of the season, Gretzky reached 31 goals early in Game 26. For the rest of that game and the next four Gretzky slumped, scoring nary a goal -- albeit with 13 (!!) assists -- to fall to just 1 goal ahead of the goal-a-game pace. In the next four games he remained there, scoring exactly one goal in each and reaching 35 goals in 34 games as the Oilers began a five game Crhistmas home stand. It looked like it would be nip and tuck for several more weeks, maybe until Games 49 and 50 in late January.

I was already a big believer in the Great One, predicting to my season ticket mates on opening night that he would score 200 points that season in what developed into an audacious, hellacious bet. Supremely confident as I was in the young man's magic, that prediction ultimately turned out to be conservative (I guessed "only" 80-120-200, whereas he really went 92-120-212 in yet another demolition job not just of records but of all reason). Even I, staunch predictor of a goal-a-game for the season, could never have guessed the dramatics that would be packed into that five-game stand.

What did happen is emblazoned in my memory as one of the most incredible sustained displays of individual domination that I've ever seen. By the time the home stand was over, the Great One had lit the lamp an incredible 15 times, adding a not-inconsequential 10 assists for 25 points. I could cite you his game-by-game numbers chapter and verse, but you can see for yourself courtesy the Hockey Summary Project, linked below:

By December 30, 27 years ago today, Gretz stood at 45 in 38 and it was clear the record was going to fall. As my mates and I made the 7-minute walk from our (still free!) parking spot to the Coliseum, we discussed the upcoming sked and guessed how many more games it would take. Tonight's opponent was no Campbell Conference softie but the perennial powerhouse Philadelphia Flyers. Yet suddenly I blurted out, "You know, it's not impossible, he only needs five" ...

Did I mention this was a magic time? Like George Orr in "The Lathe of Heaven", one merely needed to imagine the dream for it to come true. Every draft prospect seemingly developed into a Hall of Famer, the owner promised and delivered a Stanley Cup within 5 years, and Wayne Gretzky wrote scripts that would have been too silly for Hollywood but which boggled the mind in reality.

Gretzky scored twice in the first period, then beat Pete Peeters once more in each of the second and third taking him to 49, before notching his 50th on a dramatic empty netter with just 3 seconds remaining to clinch an incredible 7-5 Oilers victory. His 50th was set up by Grant Fuhr and Glenn Anderson and scored past a diving Bill Barber, Hockey Hall of Famers all, but at that moment, the 20-year-old Gretzky was a colossus who stood alone astride his sport like few -- Babe Ruth, Pele, Michael Jordan, Lance Armstrong, Tiger Woods -- ever have.

Today I had the privilege of watching that entire game for the first time since I attended the actual game. It's disc #1 in the new DVD set of the Oilers' 10 greatest games that showed up under the tree the other day. To see Gretzky's performance in the context of the entire game is much more compelling than just a highlight-reel goal, goal, goal, goal, empty net goal. It is essential viewing for those who didn't live through it but who want to get a sense of what made Gretzky so sensationally special at such a tender age.

In this game, not unlike many others of that magic time, he generated chance after chance after great scoring chance in a transcendent display of hockey genius. I didn't document but I would bet he had at least a dozen shots on net and easily could have had 12 or 15 points if every ten-bell scoring chance went in. Peeters robbed him point blank on at least three occasions, and as usual Gretzky unselfishly dished the puck to the man in the best scoring position, even when he was temprarily "stuck" on 49 goals with time running out. He was an incredibly unselfish player in that respect, talking the talk -- "My dad always told me an assist is as good as a goal" -- and walking the walk. But he was just selfish enough to shoot himself if he was the guy in the best position ... which obviously happened fairly frequently.

Gretzky scored an NHL record 10 hat tricks in that 92-goal season, a record that has been equalled only once, by Gretzky himself in his 87-goal season two years later. He had at least one assist in all ten of those games, in fact he scored at least five points in all ten. No "soft" hat tricks like, say, 3-0-3 for the Great One; he scored goals and points in bunches.

The Great One also set a modern record during that Philly game of four, 4-goal games in one season; again a record he equalled two years later but nobody else has approached since the days of Joe Malone. Gretzky established yet a third separate mark by being the only player in the history of the game to notch consecutive games of 4+ goals, a feat even he accomplished just this once ... while under the heat of attacking, and demolishing, the greatest single record in the sport.