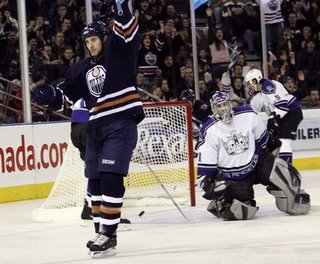 Apparently, Steve MacIntyre’s limited ice-time against Pittsburgh wasn’t solely caused by his limited on-ice ability. Scrolling through this charming story about a mothers/wives trip to New York, we find that he wasn’t in great shape after a big-time tilt with Eric Godard:

It wasn't a lack of will that kept Steve MacIntyre from returning to the lineup in Thursday's 5-4 loss to the Pittsburgh Penguins, it was the swelling on the left side of his face.
The Oilers enforcer was to undergo a CT scan in New York to determine if any bones were broken in his first scrap with Eric Godard.

Kid Line to be Split/New Lineups

Joanne Ireland has a rather predictable "growing pains" piece, on the struggles of Sam Gagner, Robert Nilsson, and Andrew Cogliano. It includes the following line:

"...the very distinct probability the Kid Line will not be together on Sunday when the Oilers take on the New Jersey Devils."

The possibility of the Kid Line getting split up is promising, although I think more for what it means to the rest of the lineup than anything else. If the three are being put on two/three separate lines, I think it means that there is a good chance that Fernando Pisani will be moved away from centre, where he’s been less than effective. It’s well and good to talk about the second line struggling, but when the third line is getting consistently outplayed (and not against tough opposition, either), than there is only one line on this team that can make headway against the toughs.

Dan Tencer has the likely line-up on his blog:

I do like that Pisani’s been moved away from centre, but otherwise, this lineup seems very odd. For starters, it makes very little sense to me to put Pisani on LW when Ethan Moreau already plays that position and can play against tough opposition. It makes even less sense considering that it means that a) Cogliano will play centre when his faceoff struggles have been comparable to Pisani’s, with the added wrinkle that he’s struggled for longer and b) Pouliot needs to play RW when he’s been effective this season on faceoffs, and on both LW and centre, but he struggled on RW last year. I personally would have done the following:

The one other thing to take out of this is that MacTavish continues to prioritize Gagner’s development over everything else. Gagner will need to play against relatively tough opposition here, given the make-shift nature of the third line, and he’ll do it with quality teammates.

Perugini Gets the Win

Oilers prospect Andrew Perugini won his second consecutive start on Friday night, making 29 saves in a 3-2 shootout win over the Victoria Salmon Kings. Perugini is now a perfect 2-0-0 on the season, with a 2.40 GAA and .926 SV%. More interestingly, Pete Peeters, the Oilers goaltending coach, was in attendance for the game. Ryan Huddy and Adam Huxley scored for Stockton, with Huddy adding a shootout goal as well. The two teams will play again tonight.