Share All sharing options for: The Ubiquitous Charlie Huddy 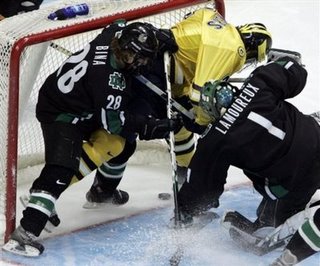 With Theo Peckham recalled by the Edmonton Oilers, and Josef Hrabal sent down to Stockton, the Springfield Falcons have called up Robbie Bina. The 5’8" defenseman wins this recall by virtue of a weak field of ECHL defensemen – Jordan Bendfeld is pointless, and the rest of the defenders range from mediocre on down. Bina has three points in seven games, and a -3 rating.

The real loser in all of this is Josef Hrabal, whose season is about as close to a trainwreck as it could possibly be at the beginning of November. He’s played one total game due to injury, and after two seasons in the RSL, he shouldn’t be in the ECHL at all, even to get playing time under his belt. The best possible outcome to all of this is that Hrabal puts on a Bryan Lerg-style performance and is recalled within a half dozen games. Injury or not, if he falters here I can’t see him in the Oilers long-term plans.

The real winner in this is Charlie Huddy. Every single Stockton Thunder press release since Ryan Huddy was assigned there has included this following random line:

Charlie Huddy, who coached in the ECHL in 1996-97, is an assistant coach with the Oilers.

Clearly, Chris Cichocki feels he could get bumped up to the AHL if somebody were to hire Huddy as a head coach.

In other minor-league news, Guy Flaming is reporting that J-F Jacques has begun rehabilitating his injury. He is, however, still about six weeks away from returning.