The Thing I Hate Most About the Edmonton Oilers

Share All sharing options for: The Thing I Hate Most About the Edmonton Oilers 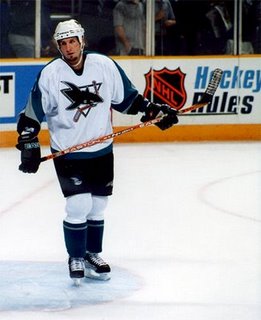 I’m not a guy who "hates" hockey players, as a rule. I’m not a big fan of Todd Bertuzzi, as an example, or Mike Comrie, or the Apostate, but I don’t hate them, for a ton of reasons. Matt Cooke bothers me, as does Sean Avery, but hate is too strong of a word.

One of my really strong hockey-watching memories as a teenager involved the one player who I did hate, at least at the time. What made it worse was that he spent three and a half seasons in an Oilers uniform. I don’t have much memory of this player as an Oiler, but he was on the team, managing 44 points in 200-and some games.

The memory I have is of a 6’2", 213lb defenseman going for the knee-on-knee hit on Oilers captain Doug Weight, who was my favorite player at the time. Weight (5’11", 196lbs), Oilers fans will remember, had a nasty edge in his own right, and he went after this defenseman. The defenseman dropped to the ice and covered his head as Weight’s gloves flew off and the Oilers captain grabbed him. Weight paused for a second, as if in confusion, and then started whaling on the prone figure, until the referees pulled him off and escorted him to the penalty box. Then, and only then, did Bryan Marchment lift himself off the ice. Read more...