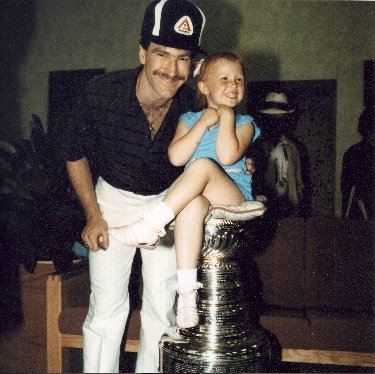 My first view of Glenn Anderson occurred sometime during the 1978-79 season, when the University of Denver brought their fine hockey team to Edmonton for an exhibition game against the University of Alberta Golden Bears. The Bears were in the second of a three-year run as national champions, perhaps the best team ever iced by this long-standing dynasty of Canadian university sport, their line-up featuring future NHLers like Don Spring, Dave Hindmarch, and their captain and CIAU Player of the Year Randy Gregg.

While I was keen to see how the Bears fared against a top NCAA team, I also went to this game with scouting aforethought. The Pioneers’ roster featured Ken Berry, a draft choice of the then-WHA Oilers and brother of Doug Berry who was breaking in with the Oilers that very season. Little did I know that a childhood friend of the Berrys would be the true find. Or as I said to my seatmate more than once that night: "Berry looks pretty good, but who in the heck is this # 9 ?!" Glenn Anderson was flying on the always-excellent Varsity (now Clare Drake) Arena ice, and made a very positive impression despite being blanked along with his mates in a 2-0 Bears victory.

One person who was likely in the building and certainly paying attention was Lorne Davis. That summer the Oilers drafted Anderson, in the fourth round, 69th overall, in the best ever Entry Draft class of 1979. Oilers’ first three picks, Kevin Lowe, Mark Messier, and Anderson, would go on to win six Stanley Cups together, five of them right here in Edmonton. I remember being thrilled on draft day that I had actually seen two of the guys we picked – Messier and Anderson – during the previous season. I had no problem remembering Anderson’s exciting pell-mell dashes towards goal, and was honestly excited that this was a great pick by the newly-reinvented NHL Oilers.

The following season Andy was back in the same arena, which is hockey’s version of Renfrew/John Ducey Park – hard on the rear end, but a wonderful place to see a game. This time the Bears’ opposition was Canada’s Olympic team that was barnstorming the country in preparation for the Lake Placid Olympics. Father David Bauer’s revised dream team was coached by Drake with assistance from Tom Watt and one Lorne Davis. In fact Team Canada featured six players from that Denver-Alberta exhibition game: Gregg, Spring, Hindmarch, John Devaney, Berry and Anderson. It also featured at least four guys who would go on to play for the Edmonton Oilers: Gregg, Anderson, Berry and (trivia fans take note) netminder Bob Dupuis.

Even though the Bears’ roster had been ravaged by "defections" to the Olympic team, they were no spent force. Drake’s assistant Billy Moores stepped to the forefront and guided a team with 11 newcomers to a third consecutive national championship. On this night they gave Team Canada one of their best games on their season long tour, handing the Red Maple Leaf a rare loss in a spirited 4-3 affair.

While there was lots of story lines and some great hockey to enjoy that night, the apple of my eye was Anderson, now a full-fledged Oilers prospect and clearly one of the stars of Canada's first Olympic hokcey team in 12 years. He had an outstanding game, scoring once, setting up another, finding iron at least once while creating one great scoring opportunity after another with his speed, puck-carrying and fearlessness. He was not yet a polished finisher in those days, it took him about a year at the NHL level before his brain caught up to his feet in the scoring area. But man, did he make things happen.

I won’t dwell on Glenn’s NHL career in this post, other than to say that at 20 he was one of the most well-rounded and NHL-ready rookies I’ve ever seen, thanks in large part to that year under Drake, Watt, and Davis. Anderson would emerge as one of the earliest and most successful graduates of Hockey Canada’s Program of Excellence, as will finally be confirmed tonight when he finally receives the highest individual honour the game can bestow.