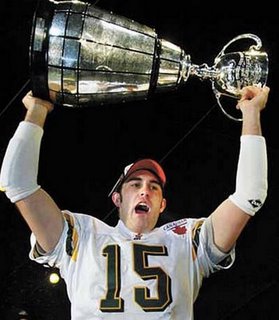 Again for the heck of it, I'll run a live blog, or turn it into a game day thread if the comments section gets rolling. Canadian football is maybe my fourth favourite team sport behind hockey, baseball and soccer, but I have been following the CFL since the early 60s and still like to watch it at this time of year. Come to think of it, football should be just right for blogging, with its ratio of 6 seconds of action to 30 seconds of getting off the pile and standing around in little circles. Whatever, if I remember to wake up I'll be here at 11 a.m. MST. Please feel free to drop by.
***

Staurday morning: Whaddya know, I did wake up, sort of. Pretty groggy after being out 'til 5 doing some astronomy, but I'm here in front of the big screen with my laptop hooked up, so how tough can it be?
***

Rereading that: Staurday? Not a promising start.
***

1/13:07 - Not a promising start for Ricky Ray either as two passes find turf and look horrible doing so. His arm was hit on the second throw. We're going into the harsh prairie wind, which combined with bitter cold provides the sort of natural challenges that can make football compelling.
***

1 / 12:00 - "There is no infraction on the play." The referee has already established there are no rules against Winnipeg. At least they're upfront about that sort of thing in this league, not like the NHL.

1/10:34 - Bombers miss a field goal, but Edmonton returner errs by conceding the single point immediately, rather than killing time by running around the end zone for a while. That will give Eskimos one or two more plays into the wind, something they don't really need. the guy frankly looked like he couldn't wait to get off the field, looks pretty miserable out there. Winnipeg 1, Edmonton 0
***

... and once again the colour guy agrees with me. :) Coming out of commercial, he makes the same point about clock management.
***

Just as I was going to comment how Edmonton was managing field position not too bad, Winnipeg has a one-play, 80-year touchdown drive. Edmonton's pass defenders manage to make contact with each other, but the receiver eludes both and trots the rest of the way. Winnipeg 8, Edmonton 0
***

1/5:23 - The surround sound really gives the sense of the crowd willing on the defensive front on third and short. There's a muffled but enthusiastic sound to a playoff crowd on a cold November day. Having attended probably 15 playoff games at Clarke and Commonwelath over the years, I can empathize.
***

... and with that I'm moving into the comments section ...