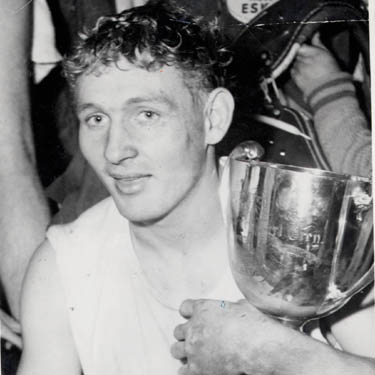 Since it worked pretty well week, I will again be hosting a game day thread for Saturday's televised CFL playoff game.
Pregame show at 10 a.m. MST, game at 11. I'll be watching the game alone most likely, and would love a little company. Please drop in and feel welcome to contribute your comments. Anybody among my tiny readership who might actually be going to the game, as DoritoGrande did last week?
***
***
On Saturday morning the Eskimos attempt to win their very first Eastern Conference championship. By virtue of their good result in WINNERpeg last weekend, Edmonton has already achieved the distinction of being the first such interloper to win their way in to the "other" conference final. 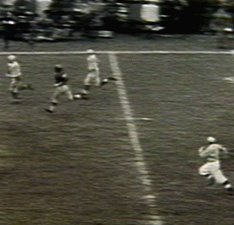 The Eskimos have encountered Montreal in the playoffs before, of course, just not until the Grey Cup, the logical time for the twain to meet. Theirs is among the most storied rivalries in Grey Cup history, beginning with Jackie Parker's return of Chuck Hunsinger's fumble in the 1954 game (pictured at right) leading to Ol' Spaghetti Legs getting his sure hands on the Grey cup (pictured above). The two teams established conference-dominating powerhouses in the mid-1950s (3 straight Grey Cup encounters, all Edmonton wins), mid-to-late 1970s (5 Grey Cup meetings in 6 years, with the Esks winning 3) and early 2000s (3 Grey Cup meetings in 4 years, Esks winning 2). Fully half of Edmonton's 22 Grey Cup appearances have come against the Alouettes, with the Esks holding a tidy 8-3 lead in the series. Two of those games occurred right in the Big Owe, with the Alouettes winning the infamous Staples Game (no, not you David) in 1977 and the Esks winning fair and square in '79.

All of which history means squat today, especially since this isn't even the Grey Cup, it's just on the road there. But it's a fact that the Big Game will held in the same Olympic Stadium a week later. There's a lot of pressure on the host of the Grey Cup to actually get there, and lots of distractions. Should things go awry in the must-win game that precedes it, a lot of Grey Cup tickets become available for below market value. :)

There are precedents: in 1987, the Eskimos won both the western final and the Grey Cup in Vancouver; and in 1993 the Esks won both in McMahon Stadium. Those were particularly sweet championships: a big upset win in the conference final, moving into the beaten hosts own "home conference" dressing room, then upholding the West's honour in the title game to, uh, muted applause.