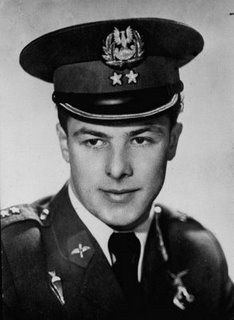 This is Franciszek Jarecki. In March of 1953, the twenty-two year old Air Force Lieutenant landed a stolen Polish MiG-15 on a Danish island. His knowledge of Soviet aircraft and tactics, as well as his providing of the opportunity to inspect the MiG-15 (it was returned a few days later) resulted in accolades from Poland's exiled government in London, an American citizenship, and a 50,000$ prize.

I am twenty-two (for some reason I told Staples a while back that I was twenty-three; silly mistake), but that's where the similarities end. I've been posting at OilersNation for awhile now, and trying to maintain this blog here, and it hasn't been much fun. Thus, I'm ending my work on this blog entirely, and will be writing exclusively on OilersNation from this point forward. Given that it's been 7 months and 310 posts, it wasn't a particularly long ride, but it was enjoyable.

Thanks to everybody who read this stuff, and especially to the folks who commented and linked here.

And I'll see you all in Denmark.