Share All sharing options for: Oilers vs. Blue Jackets: November 5, 2008 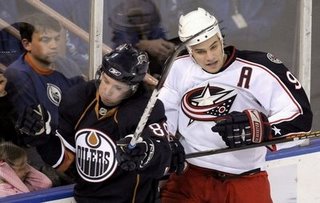 Two nights ago, the Oilers put in an effort that had Craig MacTavish spewing venom in his post-game comments:

"It's not just disappointing to lose a game where you're leading by two goals, but to do it in the fashion that we did. It's a painful lesson, a painful, painful lesson."

"There's a right way to play this game and a wrong way to play and we got on the wrong side of it early."

"The thing I said at the end of the second period is let's just go out and have a good third period and not be sitting on a bunch of regret, and we're sitting on a mountain of regret right now."

It was a five-four loss, and the fact that the Oilers blew an (undeserved) 4-2 lead made it much worse. Read more...