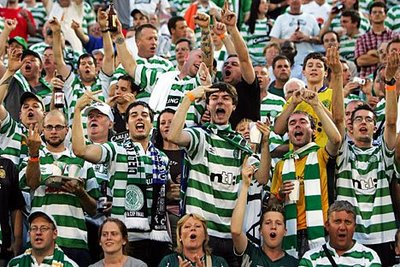 Just for the heck of it ... games, er matches like this are not a daily occurrence. Every so often the Champions League delivers a beauty.

Zeroeth minute: The Celtic supporters have already won me over with their stirring rendition of "You'll Never Walk Alone" which raise goosebumps, while delivering a happy memory of the outstanding Pink Floyd album "Meddle". The broadcast zeroes in on the crowd, ALL of them singing at the top of their lungs, respectfully waits for the chorus to finish, then the commentator mentions "When it comes to 'You Never Walk Alone', there's the Liverpool way and the Celtic way. Today is all about the Celtic way."

First minute: why do Manchester United look like Chelsea? This is the second or third time I've seen them in all blue and made the same mistake at a glance. Why would they choose that as even an alternate strip? It would be like the Oilers third jerseys were red and black. No, no, no, no, no...

Tenth minute: Cristiano Ronaldo narrowly misses scoring his 100th goal for United, as his free kick from just outside the box rockets just over the bar. CRonaldo is a marvelous player, but i can never see him without thinking of the fake ad for the Cristiano Ronaldo doll. A diving, injury-prone spring-loaded puppet. It was priceless, I'll have to see if I can find it.

Thirteenth minute: ... and now a goal!!! A SPECTACULAR goal it is too, Man U heads the free kick out of the six-yard box, but it finds the heads of three consecutive Celtic players before the last drops it on to Scott McDonald in the corner of the area. Last year's leading scorer in the Scottish league (31 goals) chests it down and on the first bounce deftly flicks the ball over the leg of the charging Rio Ferdinand, up and over the 'keeper, and down into the far corner of the net. A thing of beauty. The loudmouth colour guy on ESPN, Tommy Whathisname, called it a "rainbow job". Watch for it on tonight's HON candidates.

28th minute: After some decent ManU pressure it is Celtic who comes close, after a mix-up between ManU defenders and goalies.

30th minute: ... followed by a decent shot by Celtic, who are playing inspired football. United's keeper goes down and safely holds on.

32nd minute: A bad back pass and there's danger around the Celtic area. A great interception followed by a quick counter attack forcing a foul and a yellow card to Nani. Things are definitely going Celtic's way so far.

33rd minute: After having already pulled off an unreal "back-heel volley" pass, CRonaldo now executes a great 1-on-1 move and runs unmarked into the danger area. Danger, but no goal, ensues.

38th minute: And there is Ronaldo down, being tended to by the trainers again, with the referee's whistle buying in and awarding the foul. How did that doll commercial go? "oh! he's down! look! he's right back up again!"

45th minute: ManU wins a corner, and nearly executes perfectly, with a header just going over the bar.

Time added on: near panic on a long ball into Celtic's defensive third, where the defender chooses the best of some bad options and heads the ball away for a corner. The halftime whistle belows before it's taken. Things have definitely gone Celtic's way in this half, but i'm not convinced they're the better team.


*****
Halftime: a compelling contest so far, I'm no Celtic fan usually but today I seem to be. This is more like Scotland v. England, and my rooting interest is bred in my McBlood.

Found a still, no video, of the Ronaldo doll, but you get the gist: push the button and all his joints collapse. let it go, and he springs back up.
*****

54th minute: After some nice early play by Celtic, Man U is coming on. Celtic makes a number of fine defensive manouevres to escape trouble, and a couple of slip-ups just when things seem under control again ... things are tense at the back.

57th minute: Corner kick, a flick on and a shot by Berbatov that beats the keeper but is cleared off the line by Maloney. Wow, that was close.

62nd minute: Finally Celtic gets a counter attack going that results in a well-taken corner and their own header just over the bar.

67th minute: Full-fledged fustercluck in the Celtic area,started by yet another Celtic defender inexplicably slipping just as he was clearing the ball. Somehow the ball stays out despite crossing the face of goal about four times.

70th minute: It's an onslaught, but it's still 1-0. Tevez comes off, and the substitute is some guy named Wayne Rooney.

78th minute: anincreasingly frustrated Cristiano kicks a Celtic player. No foul is called, but if the ref saw the low angle replay it would be a yellow card for sure, possibly even a straight red cuz it appeared deliberate and not related to the ball.

80th minute: Diving stop by the Celtic keeper to parry a booming shot by Rooney.

81st minute: Ronaldo's screaming cross eludes the scrambling keeper but is headed away for a corner. Shots at goal now stand at 20:6 for the visitors. McDonald comes off for a substitude, having "run his legs off". No more substitutes for Celtic.

84th minute: It had to happen, after one Ronaldo bomb is taken flush on the forehead of a defender, the Portuguese star unleashes a second rocket from long range. It swerves viciously on the way in, the diving keeper can't control it but parries the ball right onto the feet of Ryan Giggs. 1-1.

86th minute: Ronaldo is tripped on the very edge of the area. the correct decision is a free kick from the corner of the box, which fails.

90th minute: Celtic is now hanging on for the draw. I wouldn't bet on it, their defenders look like they've just iced the puck after a two-minute shift and can't change. Except at this point, it's been a 45-minute shift.

Final whistle: After Rooney's long-range shot takes a deflection just outside the post, Berbatov gets one last great opportunity on a failed clearance, only to shoot wide. The whistle goes just in time ... or ten minutes too late. Man U is certainly full value for the draw and then some, but McDonald's brilliant strike deserved to be the winner.