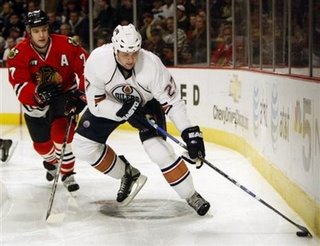 Here’s some better-late-than-never analysis of the Oil’s line match-ups on road games against the Hawks and the Avs.

The Edmonton Oilers played likely their worst game of this young season in a 3–0 loss to Chicago. Joel Quenneville’s Blackhawks dominated the entire game, and despite not running up the score, the game never really felt like it was in reach for the Oilers.

Most frustrating of all was Ales Hemsky, who has had a poor start in every area except the powerplay, and who was virtually invisible in this game. In any case, here’s how MacTavish and Quenneville managed their lines, using Vic Ferrari’s Time On Ice Tool and the same procedure as in previous installments: