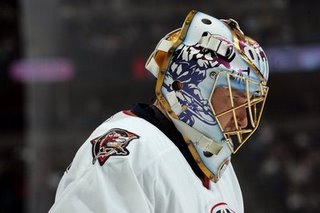 Given that the Edmonton Oilers are currently holding three goaltenders on their NHL roster, I thought it might be of interest to look around the league and see which teams could be buying or selling goaltenders.

Atlanta - The Thrashers starting netminder is injury-prone Kari Lehtonen. Lehtonen was the second overall pick in the 2002 draft, and has been a quietly excellent goaltender in Atlanta, posting .906, .912 and .916 save percentages over the last three seasons. When healthy, he can be a franchise goaltender. The back-up position is less clear, however. The organization has been publicly supportive of Johan Hedberg (who last posted a .900 SV% in 2003-04) and demoted first-rate prospect Ondrej Pavelec. Pavelec was upset, and publicly demanded a trade, with his agent throwing around words like "criminal mismanagement". To date, Pavelec has gone 5-3-1, with a 1.54 GAA and a .947 SV% in nine AHL games. He’d be an expensive, and possibly high-maintenance player, but he may very well be the best option out there for a team looking for a goaltender. Likely Seller: Ondrej Pavelec.

Boston - With Tim Thomas’ outstanding play thus far this season (4-2-2, 1.83 GAA, .944 SV%), and Tuuka Rask doing good things in the minors (5-2-0, 2.32 GAA, .923 SV%), veteran back-up Manny Fernandez may be on the trading block. In six seasons with the Wild, Fernandez was a more than capable 1A goaltender, although he’s only played 8 games in the past two seasons. He’d be an excellent pickup for any team, although it isn’t certain that Boston wants to move him. Still, Boston’s within 1M of the salary cap, and clearing away the last year of Fernandez’s 4.33M contract would give them some breathing room. Possible Seller: Manny Fernandez.

Calgary - Seemingly every year, Miikka Kiprusoff starts the year with an ntested backup. GM Daryl Sutter than promises that the backup will get playing time, to keep Kiprusoff from wearing down. Then Kipper plays nearly every game (he hasn’t missed one yet this season) and Calgary acquires a veteran at the deadline. It wouldn’t surprise me at all to see Calgary look for a cheap, older backup. Unlikely, but Possible Buyer

Chicago - The Blackhawks attempts to move Nikolai Khabibulin (one year, 6.75M salary) this off-season didn’t work out. Thus far, he’s outplayed free-agent pickup Christobal Huet (who’s been fine, if not great), but it’s still all but certain that Chicago will move him to the first team willing to take on his contract, especially considering their cap situation. While 2003 draft pick Corey Crawford is often mentioned by pundits as the likely backup after Khabibulin is moved, Dave Tallon imported Antti Niemi from Finland to play in the NHL. Thus far in the minors, Niemi’s looked NHL-calibre (4-2-0, 1.80 GAA, .942 SV%), which raises the possibility of Crawford being available as well. Seller: Nikolai Khabibulin.

Colorado - Why Francois Giguere entered the season with the tandem of Peter Budaj and Andrew Raycroft is a nearly impossible to answer question. Both are middling at best, and thus far, both have been disastrous in net (Budaj with a .876 SV%, Raycroft with .839). This situation cannot be allowed to continue, as Colorado has a good roster and could even be considered a contender with a legitimate goalie. Buyer

Dallas - Marty Turco’s been very bad to start the year (3-5-2, 4.34 GAA, .837 SV%) but he’s going nowhere and is too good to put up those sorts of numbers. However, Dallas may be in the market for a veteran backup, given that Tobias Stephan hasn’t looked good in relief (3.54 GAA, .857 SV%) and was only average in the minors last season. Possible Buyer

Los Angeles - Neither a buyer nor a seller, Los Angeles is on this list because a lot of the less-astute punditry seem to believe they need a goaltender. Here’s the thing – Jason Labarbera is off to a slow start, but was brilliant for a miserable team last season (17-23-2, 3.00 GAA, .910 SV%) while Erik Ersberg has posted the same .927 SV% through three games that he did in 14 last season. The Kings don’t need a goalie – Labarbera’s at least average, probably better, and that’s more than good enough for a basement team with Matt Greene in its top defense pairing. Happy.

Montreal - The Canadiens are set in net for years with Carey Price, so there’s no room for Jaroslav Halak to advance within the organization. Halak’s been stellar in the minors and has put up good numbers in the NHL as well, and could be of interest to teams looking for a young 1A/1B goaltender. On top of that, Montreal has a veteran backup in the system, Marc Denis, who has been phenomenal in the minors to start the season (7-1-0, 1.84 GAA, .945 SV%). Likely Seller: Jaroslav Halak.

New Jersey - The injury to Martin Brodeur creates a possible need for a stop-gap goaltender for the rest of the season. Backup Kevin Weekes hasn’t posted a .900 SV% since the lockout, while third-stringer Scott Clemmensen is only an average AHL tender. Still, I’d expect the Devils to wait a while (possibly a few "weekes") and see how Weekes responds to the job before investigating other options. The Devils are close to the cap, so expensive solutions like Khabibulin are problematic. Possible Buyer

Washington - Bruce Garrioch repeatedly suggests that management has little confidence in Jose Theodore (signed this summer to a two-year, 9-million dollar contract) and could be looking to augment the goaltending. Despite Theodore’s shaky numbers (4-3-0, 3.44 GAA, .877 SV%), I don’t see it, especially given Washington’s proximity to the cap and the necessary requirement of dumping Theodore (or another sizeable contract) to bring in a different starter. Probably Unhappy, but not doing anything about it.

So, outside of Edmonton, there are four possible sellers. Here’s how I’d rate the (possibly) available goaltenders in terms of attractiveness to buyers, based on age, salary and playing ability to date:

There are four destinations that would seem sensible for these six, ranked in order of need:

Dallas would only be looking for a backup, and while they have over 4-million in cap space, I can’t imagine they want to blow much of that on a luxury item, at least at this stage in the season. They also are unlikely to want a replacement for Turco, who is being paid nearly 6 million per season for the next two years. Thus, they may be interested in one of the Oilers’ goaltenders, but they’ll probably stand pat for now, since Roloson is expensive and Deslauriers is pretty comparable to what they already have.

UPDATE: Earl in the comments pointed out that Dallas is actually much closer to the cap; I was using a number that had Zubov on IR for the rest of the season. Dallas has no money for a goaltender at all.

The Avalanche seem unlikely to make a trade with a division rival, and probably want a long-term solution anyway, so I’d see them being more interested in Halak/Pavelec than in the Oilers goaltending duo.

Kevin Lowe has always had a good relationship with Garth Snow, and Steve Tambellini actually played for Lamoriello, so the Islanders and Devils seem like the logical partners. Both need stop-gap solutions, and neither likely wants to break the bank, for different reasons (cap space, going nowhere team with attendance woes). If I had to bet, I’d say that one of Jeff Deslauriers or Dwayne Roloson ends up in the New York area by the beginning of March.