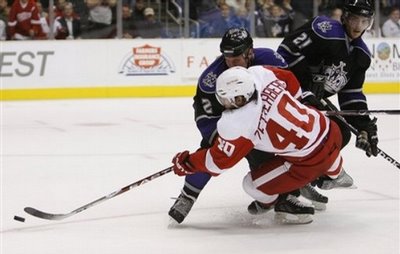 Objects in the mirror are much closer than they appear, with the Kings just 1 point behind the Oilers after 20 GP. L.A. has a slightly superior goal differential (-5 to -9) rooted in better special teams play: both teams have scored 17 powerplay goals, but the Kings have allowed just 15 PPG, the Oilers a whopping 24.

Interesting to look beyond goals to shots differential. The Kings have outshot their opponents in 15 of 20 games, the Oilers in just 5 of 20. The Kings are averaging 27.8 shots per game, the Oil 27.6, but in the defensive zone the difference is stark: 24.8 shots allowed by the Kings, a spectacular number; and 33.2 against the Oil, a spectacularly bad number. Oilers rank 28th in the league in shots allowed, ahead of just Florida and Tampa Bay. The Kings, meanwhile, ranked 28th last year; this year they rank an astonishing first overall in the National Hockey League, 0.9 shots per game better than San Jose and 2.2 shots clear of the rest of the league. (I had to check that on two different sites before I believed it!)

All of this must be put in the context that the Oilers have played the fewest home games in the NHL and the Kings the fewest road games. So they've had friendlier crowds, friendlier match-ups, and very possibly friendlier shot counters on their side. Nonetheless, it's a promising start for the young Kings and their new-but-old coach, Terry Murray.

Up front: Kings have 3 forwards (Dustin Brown, Alex Frolov, Jarret Stoll) with 6 or more goals, which is 3 more than the Oilers have. Anze Kopitar, Patrick O'Sullivan, Michal Handzus and 19-year-old Oscar Moller bring an attack that is fairly balanced across three lines.

Between the pipes: For all the LaBarbera Love in the 'sphere, the emerging goalie in LaLaLand appears to be Erik Ersberg, who for the second straight year has significantly superior percentages to LaBarbera in Pts%, GAA, and Sv%:

Interesting to see how their Sv% plummet as the team reduces shots allowed. But that's a discussion for another day.

Ex-Oiler watch: Jarret (Minus Touch) Stoll has been on the ice for 9 ES GF, just 3 GA: on a per/60 basis that translates to +2.49/-0.83. Is this the same player that posted +1.51/-3.09 with the Oil last year? On the PK unit he hasn't been on the ice for a single goal against in close to 40 minutes TOI. Surprisingly his least contribution is on the PP where he is clearly second unit.

Matt Greene (pictured) just seems to be tooling along, his "offensive" totals a pretty typical 20 GP, 0-3-3, but so far he's keeping his head above water with +2.32/-2.13. Last night in the Kings 6-2 loss in Calgary, Greene posted an assist, +1, with 3 blocks, 2 hits, 1 shot, and 0 penalties in 19:58 TOI. I watched a chunk of that game and Matt was one of the few Kings who played well. Oiler fans will salivate at the memory of Greene's flaws, but I suspect we'll notice a different aspect of his game when he's dressed in opposition silks, namely that the big lug just gets in the way an awful lot.

Keys: Playing with five days' rust it is essential that the Oilers are up to the early tempo against an opponent on the back end of back-to-backs. Oilers should have the energy advantage at the back end of the game.