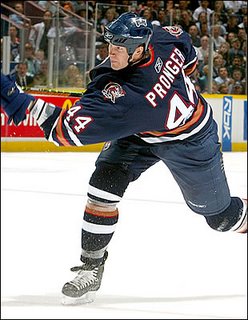 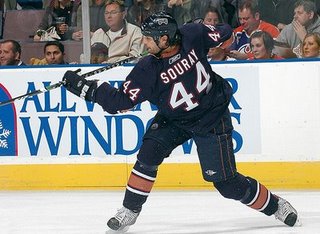 After a little more horse-trading the magic beans roughly translate into Ladi Smid, Riley Nash, and Jordan Eberle with a dash of Erik Cole. Meanwhile the cost of obtaining Souray was zero assets, just a contract. A hefty one, but we got to keep our beans.

But let’s forget those peripheral advantages of the deals -- not to mention the fact that Sheldon Souray wants to play in Edmonton and Chris Pronger doesn't -- and simply focus on the two principals. Oilers signed Pronger to a 5-year, $31 MM contract extension in 2005, and Souray to a 5-year, $27 MM UFA deal in 2007. Both were entering their 31-year-old season. Market forces aside, that’s similar enough money that shouldn’t it be reasonable to expect similar performance? But, but, but, the experts scoffed, Sheldon Souray isn’t half the player Chris Pronger is.

After an injury plagued 2007-08 that did nothing to quiet the critics, Souray has jumped out of the gate in ’08-09 with a solid stretch of hockey. Pronger, meanwhile, has rebounded somewhat from a subpar and suspension-spoiled season with what seems to be typically solid play. So for the first time since the deals, we can actually make an on-ice comparison. At the quarter-pole it’s an exceedingly interesting one:

Souray is two years younger, but with a more extensive injury history. Both are large men.

Pronger has played all 22 Ducks games, Souray 18.5 of the Oilers 20, but their boxcar numbers are very similar. Pronger is more of a playmaker, Souray a finisher, both as advertised.

Virtually identical production in all three situations. Souray’s threat as a goal scorer on the PP is borne out here.

Virtually identical on both special teams. Pronger plays 1 minute a game more at evens. Historically Pronger has played much more than Souray, but after peaking at 30:14 a game in 1999-2000 he has gradually scaled back to 26:00 in 2007-08. Souray meanwhile has seen his ice time gradually rise from ~20:00 when he first came to Montreal to 23:11 his last year there and 24:21 his abbreviated first year here. The gap continues to narrow this early season.

Shots and missed shots a dead heat. Souray with the higher Sh%, of course. Pronger leads in "defensive points" (hits + shot blocks), but has played 13 home games to Souray’s 5 in front of a friendly local counter; still, the edge has to go to Pronger in measurable defensive contribution. Both have very similar GvA/TkA stats.

Again, very little to choose here with the obvious exception of QualTeam. I have to say of all the New Statistics that is the one that is giving me the most trouble this early season with its rapid fluctuations. So much so that I queried Gabe Desjardins a while back; he responded: "qualcomp is a lot bigger at the beginning of the year due to huge variations in performance that narrow quite quickly as the year goes on". However, it must be pointed out that Souray has played most of the season with Lubo Visnovsky, while according to BtN, Pronger played the first month with the likes of Nathan McIver and Bret Hedican. I haven't been following the Ducks, but Carlyle's tendencies have been to run Pronger and Niedermayer both at right defence at evens so that at a given time one of them is likely on the ice. MacT runs his bench differently, but has switched up pairings in the last week or so.

Both players have excellent results on the PP, not so great on the PK, but the difference between the two is positive in both cases; their combined effect on special teams is roughly +1/60.

These are all team results with that player on the ice. There’s damn little to choose, Oilers have a better Sh% with Souray on the ice, but Souray seems to be a better shooter than Pronger, so maybe that is to be expected. The ZoneShift is a term recently coined by Vic Ferrari, and refers to the location of faceoffs starting and during a players’ shift vs. those at the end of the shift. In Souray’s case he starts slightly more plays in his own zone and ends slightly more in the offensive zone, a pretty good indicator that play is flowing at least somewhat in Oilers’ favour when he is out there. Pronger starts way more often in the offensive zone for some reason, and ends his shift there considerably less often, suggesting a flow of play against the Ducks.

Oh yeah, the bottom line: Souray has a somewhat lower cap hit, and is locked up for two years longer than Pronger, which is either good or bad depending on your opinion of Souray. My own opinion is that Pronger is the better player, but parsing all the above, statistically there’s been precious little to choose between the two in the first quarter.

I will follow this comp with some interest as the season proceeds. It’s early days for many of these types of stats, but so far it’s tough to argue there’s much to choose between the old 44 and the new one. If Visnovsky is out a while that could change things, although Souray has been playing with Gilbert of late anyway, with no apparent drop-off in his effectiveness.

While I had higher expectations of Sheldon than many, I am still pleasantly surprised by how solidly he has contributed to this point. This favourable comparison to one of the elite defenders in the game only reinforces that.