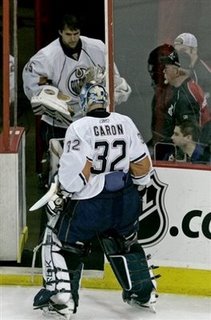 It has now been fairly widely reported that New Jersey Devils professional scout Bob Hoffmeyer was in attendance at the Oilers-Blue Jackets game last night. It’s also been reported that he’s expected to attend tonight’s match against the Penguins.

Sportsnet’s Mark Spector has the definitive column on the subject, which isn’t something I’m used to saying about Sportsnet writers.

Discussing the tandem of Garon and Roloson, Spector said the following:

Sportsnet.ca has learned that internal discussions are focused on which goalie would go… do the Oilers send Garon, who is younger at age 30 and makes just US $1 million this season, to New Jersey? Or does this opportunity mark a peak in value for the 39-year-old Roloson, who will make US$3 million this season?

Now, if this information is accurate (and Dwayne Roloson starting the last four games lends credence to it), Lowe, Tambellini and the rest of the Oilers front office are seriously considering going with a Roloson/Deslauriers tandem for the remainder of the year. Read more...