From the archives: The campaign to elect Glenn Anderson

Share All sharing options for: From the archives: The campaign to elect Glenn Anderson 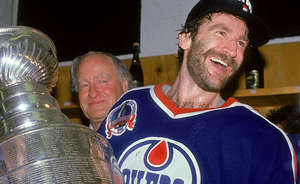 Date: November 13, 2006
To: Hockey Hall of Fame
From: Bruce
Re: The compelling case for Glenn Anderson

When Wayne Gretzky retired in the spring of 1999, the NHL decided to honour him in a multitude of ways, including immediate induction into the Hockey Hall of Fame. The decision to waive the customary three-year waiting period was not unprecedented, so the further decision was taken that the Great One should enter the Hall of Fame alone, since anybody else's accomplishments and, especially, statistics would pale in comparison.


Lost in the Gretzky spotlight yet again was one Glenn Anderson, another Oilers superstar of the 80s who had retired in 1996. Under normal circumstances Anderson would have been first considered for the HHoF in 1999, instead he was put off to 2000 to compete with a second graduating class. And he's been put off ever since.


Tonight Dick Duff becomes the 10th NHL forward to enter the HHoF since 2000. Duff was an excellent role player on two mini-dynasties, the Leafs of the early 60s and the Habs of the late 60s. Duff's statistics are well below HHoF standards, but he has the deserved reputation as a clutch player, and is the first of those ten inductees to have equalled Glenn Anderson's total of six Stanley Cups. So certainly Duff was a worthy candidate, if a borderline inductee.


Anderson played a few more games than average, but his goals and points per game were a virtual saw-off. Now let's look at the playoffs:

Anderson is the fourth highest scorer in Stanley Cup history. Of the 10 inductees only Kurri and Savard have even half of his points. In the tighter checking of the playoffs the peer group's per-game production fell by about 10%, Anderson's by a bare 2%. More importantly he played way more games, which in the playoffs is a direct by-product of WINNING. He's got the 6 rings to prove it; even with the addition of Duff, the group of 10 have only 19 among them, including five players with none at all. For sure part of that is opportunity, but you could make the same case for Duff, Kurri, Gillies, and Mullen who all landed in the right place(s) at the right time and made the most of their opportunity.
The most statistically comparable inductee to Anderson is probably Joe Mullen, a player with virtually identical regular season stats to Anderson (502 goals to 498, 1063 points to 1099) but only half of Andy's playoff production (106 points to 214, three Cups to Anderson's six). Mullen was inducted in his first year of eligibility, while 10 years after his retirement Anderson remains on the outside looking in. It is not my point to say Joe Mullen doesn't belong in the Hall -- quite the contrary! -- but if he's there, Glenn Anderson should be there.

Ironically, perhaps the most stylistically-comparable recent inductee to Anderson is the one non-NHLer, Valeri Kharlamov. Both were lightning-in-a-bottle fast with an equal ability to finish a solo drive to the net or make the killer pass at full speed. Both game-breakers struck terror into their opposition with their innate ability to rise to the big occasion, and to find or create holes in the staunchest defences. In Anderson's case, that can be seen in his five playoff overtime goals, or that in an Oiler record book dominated by Gretzky it is Anderson who comfortably leads in game-winning goals.


Andy loved to represent Canada and for years was an automatic choice for the world's deepest team, winning two Canada Cups and appearing in the Olympics, two World Championships (on the rare occasions his playoffs ended early), and on the All-NHL team in Rendezvous '87.

As his peer group shows, making the Hall of Fame can be about the numbers, or it can be about winning. Glenn Anderson's case can be made on both fronts. His continued exclusion from the Hockey Hall of Fame casts a bad light not on the individual, but the institution.

Date: November 15, 2006
To: Bruce
From: Philip Pritchard, HHoF
Re: The compelling case for Glenn Anderson

Thanks for the note and your interest in the Hockey Hall of Fame.


I am going to forward this on to the Hockey Hall of Fame's Selection Committee. I trust they will look at it and appreciate all the talents Mr. Anderson brought to the game of hockey, as much as you do.


Thanks again for your interest.