Defence at the quarter pole

Share All sharing options for: Defence at the quarter pole 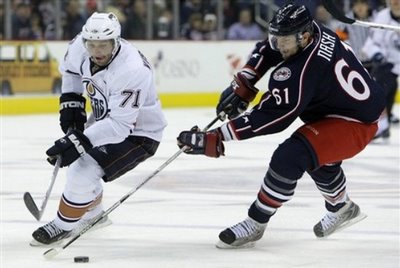 Facts, stats, and observations about the Oilers defence corps 20 games in.

The Oilers rely more heavily on scoring from the back end than almost any other NHL squad. Oilers currently (thru Monday's games) feature 3 of the top 25 defence scorers in the NHL (Souray 9th, Visnovsky 19th, Gilbert 25th). All 3 rank among Oilers' top 5 scorers; only Nashville and San Jose even have 2 D in their top 5, all other teams 1 or 0. Similarly, Oilers are the only team with 4 defencemen in their top 8.

Sheldon Souray leads the Oilers in goals with 7, while no forward has managed more than 5. The other 29 NHL teams have a forward as their leading goal scorer, although in Nashville there is a tie between a D (Shea Weber) and a F (Jason Arnott).

Time on ice: Visnovsky is leaned on heavily at evens, 18:35 per game. The rest of the big four all come in right around 16 minutes, Staios 14, Strudwick and Smid 12. Visnovsky also leads the PP at a shade under 5 minutes a game, but ranks a distant 6th among penalty killers at under 1:00 per. Souray makes huge contributions to both special teams (4:45 and 3:55) and thus joins Visnovsky with 24+ minutes of total ice time. The PP has been divided 70/30 between Visnovsky/Souray and Gilbert/Grebeshkov, which is tough to argue with given both of the big money guys have earned a good reputation as a power player. It'll be interesting to see how this morphs as MacT tinkers with the pairings. It's also tough to argue with no other defenceman on the team averaging more than 0:10 PP TOI/G. Meanwhile, Staios and Souray anchor the PK, with Strudwick, Gilbert and to a lesser extent Grebs contributing appreciable time (if not results).

Special teams: On the PP so far, Souray has been The Man. He has been on the ice for 12 of the 15 5v4 goals, with an impressive +8.21/60. Visnovsky, Grebs, and Gilbert are all between 5 and 5.5. The PP is only +2.94 when Souray is OFF the ice, whereas the other guys all see the PP improve from the low +5s to +7 or 8 when they leave the ice. On the PK, Strudwick impressed until the most recent game, and still leads the way with a modest -3.03/60. Gilbert and Souray are semi-respectable around -7, but the other guys are in minus double digits per 60 which is flat out terrible. Visnovsky trails at worse than -14 ... egads.

From these last sets of numbers it is clear that our third pairing is getting killed out there at evens. Despite the fact Strudwick has started exactly the same number plays in the offensive and defensive zones (52 each), Oilers have been outshot a staggering 134-69 with him on the ice. Staios actually has started more shifts in the offensive zone (73-64), yet the shots against are nearly as bad at 150-93. This has begun to show up on the scoreboard in recent games.

On the other hand, there’s this from the same source (timeonice.com):

... which suggests that perhaps the two veterans are limiting the quality of the shots they allow even as they are getting clobbered in the territorial play. The next two on the list are also veterans who have the decided advantage of creating stuff in the other end. Meanwhile Gilbert and especially Grebeshkov have been doing well in driving the play judging from the above Corsi and ZoneShift numbers, yet both are minus players because … their goalies stink? they’ve been giving up ten bell chances? The Dice Are Rattling? Yet more grist for the Corsi/shots/shot quality debate that has been a recurring – and fascinating – theme of the Oilogosphere since I’ve been around and before. At this point I have concluded nothing more than the answer lies somewhere in the middle between quantity and quality, and neither can be trusted on their own to tell the whole story.

The Oilers' current group makes an interesting case study towards this discussion which I will continue to follow with interest.