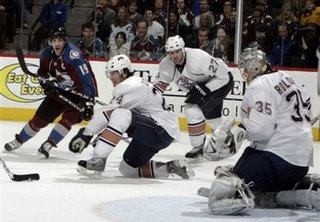 The Oilers have been a very interesting team to watch this year, without question. The goaltending carousel has taken an interesting twist, with incumbent Mathieu Garon falling behind Dwayne Roloson early, and than Jeff Deslauriers taking his chance and running with it. The defense has been surprisingly good, with the Souray-Visnovsky pairing looking very effective (and even worth their moey) and Gilbert-Grebeshkov rounding into form. A slow start for the Kid Line has had different results for each, with Cogliano and Nilsson seeing reductions in role and ice-time, and Sam Gagner playing with Ales Hemsky and Dustin Penner. Cole has looked like a quality player, and MacTavish has finally given up on Fernando Pisani as a centre.

Vic Ferrari over at Irreverent Oiler Fans has a brilliant post up about a new modification to his statistical tool, timeonice.com. It allows anybody to look at combinations of players and see how they’ve done while on the ice together. Ferrari focuses in on Horcoff and Visnovsky, who have outplayed the opposition by a wide margin this season, and t got me to looking at other players. The two players I keyed in on were Penner and Staios, who I have been watchiong closely this season anyway. The reason I keyed in on them is because they have the best on-ice team shooting percentage of Oilkers players.

Penner, to my eye, has been a reliable player all over the ice, despite his biggest limitation (footspeed), but hasn’t been terribly effective scoring. Penner’s official stats line would seem to bear that out (15GP-3G-1A-4PTS, +6), but his scoring decline isn’t really a decline at all. The difference is his distribution of ice-time. Last season, Penner scored at an even-strength rate of 1.34 PTS/60. This year, it’s 1.40 PTS/60. Last year, Penner scored 25 of his 47 points at even-strength, with the rest coming on the powerplay. This season, Penner has all four of his points at even-strength; he’s on pace for 22 points with reduced ice-time. Ferrari’s tool tells me much the same; although Penner has been lucky, with a .951 SV% behind him, and a 10.8% team shooting percentage when he’s on the ice, his Corsi number (+24) indicates that the team has been spending a bunch of time in the offensive zone when he’s on the ice. Given the matchups I’ve been posting so far this season (where Penner has seen some dfficult minutes), that’s a really good number. Ferrari’s other interesting stat (which he’s named ZoneShift) measures where a player starts and ends on the ice; a player who starts in the offensive zone 5 times more than in the defensive zone, and ends in the defensive zone 5 times more than in the offensive zone would be -10. It’s a good way of showing whether players are helping the team create scoring chances for themselves or for the opposition. By this Measure, Penner is -8, starting in the offensive zone 25 more times, and ending their 17 more times. Not a dominant performance, but really not bad either.

Steve Staios, on the other hand, has had the wheels fall off. He hasn’t looked bad, and his stats line (13GP-1G-1A-2PTS, +3) looks good too, but if we consider the context, we realize those numbers should be much worse. The shooting percentage with Staios on the ice is the best on the team (11.4%), and unless we want to credit Staios’ incredible play-making ability as the cause of that, we know it’s only going to go downhill. The save percentage behind Staios (.955) is also incredibly good and unsustainable. Staios has been playing against third-pairing opposition with Jason Strudwick, leaving the toughest assignments to the top two pairings. His Corsi number is an ugly -46; the team has been heavily outshot with Staios on the ice. On top of that, Staios has been starting most of the time in the offensive zone (11 more offensive zone than defensive zone draws) and finishing in his own zone (13 more defensive zone draws). The puck is moving in the wrong direction when Staios is on the ice, and the team has been getting outshot, all while Staios draws lower quality opposition. Given that he’s signed for another three years at a rather hefty price (2.7 million per season), this is a very worrying trend.