Clogging up the ice -- an NHL directive

Share All sharing options for: Clogging up the ice -- an NHL directive 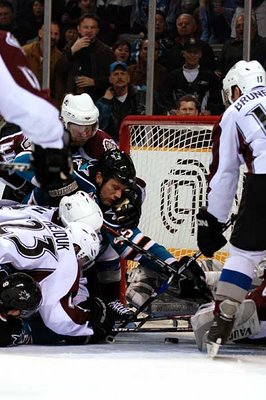 It's axiomatic that "the ice is smaller" these days. Players are both bigger and faster, taking away both time and space -- precious commodities that even the cleverest scorers need to make their mark. While the dimensions of the NHL rink have remained constant at 200'x85', the growth of the 'average' player has been ongoing, and rapid. (I have no stats, but I'd guess and extra inch and 10 pounds every 15-20 years) A player who begins his career a big man will be much closer to the mid-point by the time he's finished.

What has the NHL done to combat this? The league's history of rule changes with respect to manpower situations is more than a little revealing. My trusty NHL Official Guide and Record Book (Major Rule Changes, pp. 10-11) confirms (most of) a sorry trend that has been occurring throughout my lifetime of increasing 'free substitution' for penalized players, resulting in more players on the ice:
***

1925-26: 'Delayed penalty rules introduced. Each team must have a minimum of four players on the ice at all times.' OK, I'll admit this one wasn't during my lifetime. A team with three or more penalties can only be two men short.

Consequences: No more 5v2 or 4v2 powerplays. Referees become terrified of calling that third penalty no matter what, because it means a long boring conversation with an uncomprehending local timekeeper about who can come out of the box when.
***

1956-57: 'Player serving a minor penalty allowed to return to the ice when a [powerplay] goal is scored by opposing team.' The 'Montreal Canadiens Rule', meant to somewhat derail the Habs' devastating powerplay. I can probably pinpoint the exact occasion that precipitated this change, which is mentioned elsewhere in the Guide - actually, in the Record Book: November 5, 1955, Jean Béliveau scores three powerplay goals in 44 seconds. All three are assisted by Bert Olmstead. (Both are second, to Bill Mosienko and Gus Bodnar respectively, who combined for a hat trick in just 21 seconds in 1952, although I'm almost certain no powerplay was involved that time.) By season's end Béliveau leads the league in goals (47) and points (88); Olmstead in assists (a record 56). More importantly the emerging Habitant powerhouse wins the Prince of Wales Trophy (then the equivalent of the President's Trophy) by an astonishing 24 points before rolling to their first of five straight Cups. They're too good! They must be stopped at all costs. Let's fiddle with the rules.

Consequences: Players who might think twice about taking what the soccer commentators call a 'professional foul' to prevent a goal-scoring opportunity no longer need to factor in that the penalty might cost his team more than the imminent goal. Now it's a 'good' penalty to take away even a 20% scoring opportunity and turn matters over to an 85% PK unit. The worst result either way is one goal against, a break-even proposition. And when a PP goal is scored, there's one more player allowed on the ice.
***

1966-67: 'Substitution allowed on coincident major penalties.' A biggie. Before this every fight resulted in a five-minute 4v4. Better yet, a multi-player brawl could result in five minutes of 3v3 action. It was a wonderful self-cleaning mechanism for ugly games - the ice opened up right away, and it became a skill and skating game far away from the boards. The action was often pulsating; a failed 2-on-1 at one end could lead to an immediate 2-on-1 going the other way. Mobile defencemen like Pierre Pilote and speedy two-way forwards like Dave Keon and Henri Richard excelled.

Consequences: Two to four more players on the ice for long stretches of 5 or even 10 minutes after fights/brawls. 3v3 went the way of the dinosaurs. No wait a minute, the dinosaurs were alive and well, running the NHL even then. 3v3 went the way of the unicorn. The dwindling few of us who remember that kind of open-ice magic are written off as demented whiners for the 'good old days', or more likely, ignored completely.
***

Late 1970s: (not in the book, so apparently not a 'major' change. I'll paraphrase): Substitution allowed on coincidental minors where manpower is already unequal. A 4v3 powerplay was (and remains) a far better opportunity than a 5v4, so if the team on the powerplay could somehow induce coincidental penalties they would greatly improve their chances of scoring. Call this the 'Philadelphia Flyers Rule', because the B.S. Bullies were renowned for this tactic. Their willing and able accomplices, the referees, aided and abetted their cause by being far more willing to call simultaneous penalties than stand alone penalties in a scrum. The obvious question, 'which foul causes the coincidental minors, the initiation or retaliation?', is never addressed. The solution of dealing with Philly's bullying tactics when a man up by issuing them the only penalty in a needless scrum, apparently never occurs to tiny dinosaur brains.

Consequences: Fewer 4v3 powerplays, no matter how legitimate and even the altercation might be. Two more players on the ice in such situations.
***

1985-86: 'Substitutions allowed in the event of coincidental minor penalties.' Another biggie. The 'Edmonton Oilers Rule' was a Calgary plot masterminded by Cliff Fletcher to slow down the Oilers, no matter what the cost to the game. I was outraged at the time that it was proposed, apoplectic when it got adopted, incensed and appalled when it actually worked (Calgary won a memorable playoff series that very year, largely by gooning it up without fear of open ice consequences), and I remain to this day adamantly opposed to this idea which attacked one of the fundamentals of the game. Like the Canadiens three decades before, the Oilers found a way to continue to dominate, even without their (ahem) 'unfair advantage'. (They still had their other unfair advantage, better players.) But the game suffered dearly.

Consequences: Way more players on the ice, two guys for two minutes every time the rule is invoked (which is frequently). For seven years I undertook the exercise of figuring at the first face-off after coincidental penalties, which players wouldn't be on the ice if the penalties had to be served, and invariably it was the 'third guy high', defensive forwards, the guys whose bloody job is to clog up the ice. The Oilers, who gave up tons of goals 4v4 but scored even more, could no longer turn every missed two-man attack into a 3-on-2 (typically Coffey with either Gretzky-Kurri or Messier-Anderson) going the other way. That's much too exciting. They're too good! They must be stopped at all costs. Let's fiddle with the rules.
***

1992-93: 'No substitutions allowed in the event of coincidental minor penalties called when both teams are at full strength.' A lame attempt to 'fix' the mistake of 1985-86. (The two rule changes, radical and corrective, should be considered as one moderate change IMO)

Consequences: A significant improvement, but in the NHL's typically half-assed manner it only goes partway. It results in 4v4 opportunities when exactly two minors are called. If three occur, the powerplay is not a 4v3, it's the sameoldsameold 5v4. When two penalties occur to each team, it's no longer two minutes of 3v3; or in the event of 4 minutes to one player and 2 to two different opponents, two minutes of 4v3 one way followed by both guys jumping out of the box simultaneously to make it a 5v4 the other way. All of those manpower options have been excised from the game. I don't think I have seen 20 minutes of 3v3 action in the last 20 years, and I watch my share of hockey.
***

1999-2000: Again paraphrasing a truly minor change (goes to intent, Your Honour). If a team killing a 3v4 penalty in overtime takes a second penalty, the other team gets to ADD a player. While a necessary tinker to the 4v4 OT rule also brought in that season, only in Gary Bettman's NHL would a penalty result in more players on the ice than before.

In Bettman's 'defence', all the other rule changes above preceded his It-Only-Seems-Like-Forever tenure. On the (criminal) 'offence' side of Bettman's ledger, he was in a 'more is more' mood that year, awarding a free point to all teams who could score in overtime, without commensurate cost to the team that allowed said overtime goal. That and 4v4 action sure opened up overtime, at the heavy cost of much more clogging of the ice in regulation time (which of course is at least 92.3% of every game, but hey, he's a basketball guy, who needs an exciting game when you can have an exciting finish?)

Consequences: Very little, two-man advantages are rare in overtime. But this wrinkle exposes the lack of continuity in the 'gimmick' of 4v4 overtime, as Bettman & Co. toy with the fundamentals of the game.
***

Commentary: The game of hockey was originally designed so that teams have to face multiple manpower situations: 5v5, 5v4, 5v3, 4v5, 4v4, 4v3, 3v5, 3v4, and 3v3, plus various goalie-out scenarios. But with the exception of the partial fix of 1992, all substitution rules (including a few I didn't mention that gradually reduced the manpower disadvantage consequences of a match penalty) have been in the direction of more players on the ice, not fewer, including the virtual eradication of the most exciting variation of even-but-not-full strength, the 3v3 . The NHL is clogging up its own ice with its short-sighted league policies and knee-jerk 'they must be stopped at all costs' rule changes.
The greatest fear in Gary Bettman's NHL is that rather than look for precedents within the league's own history -- with which the league's current brain trust [sic] is frightfully out of touch -- they will attempt some new massive "fix" like full-time 4v4 hockey to open up the ice. To which my response would be "No, no, a thousand times no!" There is nothing like good old-fashioned 5v5 hockey, and the permanent loss of a player might virtually eliminate the physical aspect of the game that most fans love. (When was the last time you saw a big hit in regular-season overtime?) I'd just like to see the penalty substitution rules revisited so the full variety of manpower situations would occur more frequently.