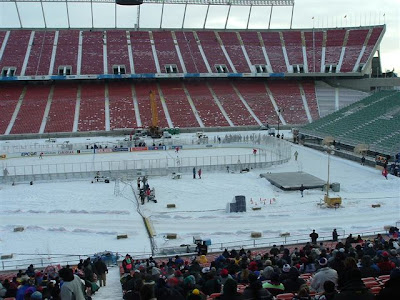 Five years ago this weekend Edmonton hosted the NHL’s first outdoor game. This lifelong fan was one of 57,167 people in attendance that day, but my experiences over that hockey weekend were in some ways entirely unique. I think it’s a story worth (re)telling. Part 1 of 2 follows.
*****

Friday, November 21, 2003. Earlier in the week, a close friend had given me the heads-up to the Heritage Classic contest on CBC Radio One's Radioactive show. They had a pair of tickets for the person who could produce the earliest ticket from an Oilers’ NHL game. Val thought of me immediately and knowing that I’m a CKUA guy, not to mention a hockey guy who didn't yet have tickets, took the trouble to call. So I trundled in to CBC's new downtown studios with my entire 47-game set of ticket stubs from Season One. (Five exhibition games, 40 regular season games, one international with Moscow Dynamo, and one playoff game; I went to them all.) They were only particularly interested in Game One, October 13, 1979, which of course was included. As luck had it, within a minute of my arrival an elderly lady came in also with a ticket from that game, and they said we were the first two. So they interviewed both of us on-air and decided that as a tie-breaker there will be a live-on-air Oilers' trivia contest on Friday afternoon. I was to face off against the lady's son -- likely to be about my age -- and possibly others who brought their stubs before the deadline, with the winner to receive a brace of tickets to the game.

Friday was an interesting day to say the least. First I took in the morning skate, thanks to an old friend who had received a four pack acknowledging his 25(+) years as an Oiler season ticket holder. They seemed to have been quite stingy doling out tix; there were maybe 5, or 6,000 people there. Room for ten times that many. Although I noticed there were lots of school groups, hockey teams and the like.

It was numbingly cold. I had inadequate gloves, and when I took my hands out to get out my camera or binoculars, well, I just couldn't get them warm again (outside of drastic action which I was unprepared to take). It was fun to see Lafleur and Shutt bearing down on Robinson in a 2-on-1 drill, although the passes were rarely on the mark it seemed. There were a fair number of Habs sweaters and toques in the stands, some people wearing the logo of both teams. A particularly fitting touch was supplied by one wag who posted the score of Guests 6, Home 15 on the temporary scoreboard. I instantly recognized it as the aggregate score of the Little Big Horn Series of 1981. Oilers over Habs 6-3, 3-1, 6-2. Ouch.

For some unexplained, inexplicable reason, there was an interminable 80-minute "intermission" between the two teams' skates. What the hell could they possibly have been doing? Dunno, nobody bothered to turn on the PA. Had a whole bunch of the Oilers' best customers a little nonplussed, to say the least.

But it was for the Oilers that most people came -- and waited, and waited -- and were rewarded by the following starting line-ups for the scrimmage (colours were blue for defence, white for forward, so I had to choose names for the teams):

Obviously, the "action" couldn't possibly live up to those great names, but to think the Oilers have such a proud legacy after only 25 years in the NHL was (almost) enough to warm the heartles of my... wait a minute.

Other trios included the Original NHL Oiler Line of Chipperfield with Hunter and Lumley, and the Rat's Paradise Line of Linseman, Semenko, and McSorley. Other blueliners included Gregg, Muni, and Beukeboom and some guy O'Flynn, # 03. Maybe he won some contest or something, I dunno, but he allowed everybody to take a breather. Meanwhile, I had my own contest to think about. I still didn’t know if I’d be back to see these guys play one last game.

The CBC contest was exciting to say the least, starting with the adventure of trying to park downtown with all the metres off-line during rush hour. I was (as usual) pushing the envelope re: timeliness, and traffic had been terribly slow, so I sent my son in to the studio to tell them while I searched for a parking spot. I tried to rush into the library parkade but miscalculated by a block and went down the up ramp. The attendant came rushing out of the booth flailing his arms, giving me what-for and making me back all the way up the narrow ramp. I finally got parked and hustled off to the studio. By now my pulse rate was about 200 rpm, but I finally got into the studio with time to catch my breath; the other guy was late!

Turned out there were just the two of us, standing on the stage in front of a live, and large, studio audience. Live music (Captain Tractor), party atmosphere, no pressure. (Yeah, sur-re.) Upon introduction I did a pirouette showing the proud #99 on the back of my Oiler sweater, which may have won me a few fans.

The contest was three "periods" of two trivia questions each, six questions in all. I played it just like the Oilers, skating out to an excellent first period and taking a 2-1 lead thanks to my knowledge of Paul Coffey's records, before completely tanking the second to fall behind 3-2 and get myself seriously behind the eight-ball. I was stumped by consecutive questions: where was the 2000 NHL All-Star Game (the tenuous connection to Oilers being that was when the NHL officially retired Gretzky's number); I remembered Canada, I guessed Vancouver but given it was CBC I should have defaulted to the correct answer, Toronto. And where did Mike Comrie play college hockey? "Michigan..." I began, and the host started to congratulate me before I foolishly finished my guess "…State." Wrong: Comrie went to Michigan, his contemporary Shawn Horcoff to Michigan State. I lump the two together, I could have told them Horcoff beat Comrie for the 1999-2000 CCHA scoring title by one point, but I couldn't remember which guy went to which school.

As it turned out, I knew the answers to every last one of my opponent's questions, but not these two. So when he got set up like a sweet Gretzky feed to start the third period, how many goals did Gretzky get in his record year, it was 4-2 and I had no room to manoeuvre. I had to get my two questions right, then hope he missed, then win it in OT. True story: at this moment my mind flashed back to one of my favourite Oiler games of all time, Game 2 of the 1988 Blow Out the Flames series, when the Oilers themselves trailed by 4-2 only to pull off the comeback and complete it in overtime on a memorable goal by Wayne Gretzky. Oilers 5, Calgary 4.

Visualization works; that's pretty much how this one played out. I answered a couple of fairly tough ones: who played the most games in goal for Oilers (Bill Ranford, 449), and who had the first shutout for the Oilers. "Eddie Mio" I responded, biting my tongue on "3-0 over Hartford, December 9, 1979." At this point it didn't matter what I knew, there were no extra points for know-it-alls, and it was out of my hands. And here it came: "Who scored the Oilers' first hat trick... ("B.J. MacDonald" my mind screamed)... at home AND first hat trick on the road?" Egads, I'm thinking, TWO clues, I'm dead, and of all the guys to beat me, it's my old favourite B.J. But my opponent asked him to repeat the question and was clearly stumped. Finally... "Wayne Gretzky?" Good guess, but wrong, and off to OT we go. Once again I got first choice, and answered an easy one about who the Oilers first playoff series was against. (Philadelphia) My opponent was asked who led the Oilers in playoff scoring that spring of 2003, guessed Ryan Smyth instead of the afore-mentioned Shawn Horcoff, and I had won. 5-4, in overtime. Felt just as good as that shorthanded Gretzky slapper over Vernon’s shoulder.

There was quite a big cheer from the audience as I received a pair of the hottest tickets this town has seen in a long time and held them triumphantly aloft. I showed one to my son and said "for you!" My opponent got a nice bunch of prizes too, including the new Gretzky DVD, but I had what I wanted. A few complete strangers came up to shake my hand.

My son and I celebrated by heading to City Hall to see the great NHL exhibit there. 18 beautiful trophies in the silverware collection, including the spectacular new Rocket Richard Trophy which is another gorgeous work of art. I visited the Gretzky Wing of the Art Ross and Hart Trophies, and saw the inscriptions of Grant Fuhr on the Vezina, Mark Messier on the Smythe, Paul Coffey on the Norris, Jari Kurri on the Byng, Edmonton Oilers again and again on the Clarence Campbell Bowl and on the first two plates of the President's Trophy. It had been a pretty spectacular 25 years for NHL hockey here in Edmonton, especially the first dozen.

Stanley was there too, but roped off and almost impossible to read at a distance, although very easy to admire. They also had some real nifty Hockey Hall of Fame displays: Frank Mahovlich's rookie sweater, the (unridged) puck with which Nels (Old Poison) Stewart scored his 200th goal, and most interestingly to me, Bill Durnan's old goal gloves. Another in the long line of great Montreal netminders, Durnan was the only ambidextrous goalie in NHL history. When he had time to prepare for an angled attack he switched his stick to the short side post, so both gloves were a weird combination of blocker and catcher. It seems to have been a good strategy: in Durnan's short, seven-year career, he got his own name inscribed on the Vezina six times.

Finally leaving the milling throng at City Hall, we found the right hole to depart the parkade and hit Thanh Thanh for a small celebratory feast Vietnamese style. Saturday would be another busy day...