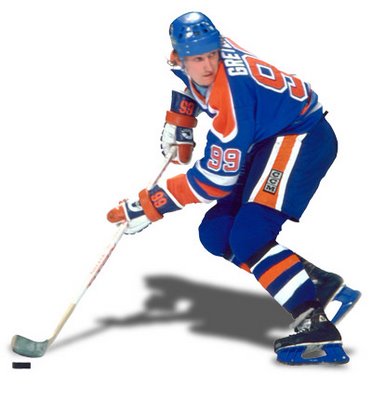 Thirty years ago today, on November 2 1978, the hockey landscape in Edmonton changed forever.
The World Hockey Association had begun its seventh and ultimately final season under the usual cloud of controversy. The previous summer overtures at a merger with the NHL had been rebuffed, and the Rebel League's struggling southern franchises responded with an unprecedented raid of underage talent. in 1977-78 the Birmingham Bulls had signed Ken Linseman as an underage test case, but now the gloves were off. The Bulls signed goalie Pat Riggin, defenders Craig Hartsburg, Rob Ramage, and Gaston Gingras, and forwards Michel Goulet and Rick Vaive. The Cincinnati Stingers snapped up Mike Gartner. And the Indianapolis Racers snagged the biggest prize of all, the 17-year-old wunderkind Wayne Gretzky, fully three years before he was eligible to be drafted into the NHL. The Racers' flamboyant owner Nelson Skalbania penned "the Kid" to a seven-year, $1.75 MM contract that shook the hockey world.
Gretzky was already famous for his scoring exploits as an amateur, coming to national attention at a very young age by posting unbelievable totals during his minor hockey days. The previous year he had taken the OHA by storm, scoring 70 goals and 112 assists in just 63 games as a 16-year-old, finishing a close second in league scoring just behind 19-year-old Bobby Smith, who would go on to be the #1 draft in the NHL. Gretzky was almost singlehandedly responsible for raising the profile of the fledgling World Junior tournament with a dominant performance, leading the tourney in scoring as its youngest player with 8 goals and 9 assists. A superior Soviet squad won a critical showdown en route to the gold medal, with 19-year-old captain Slava Fetisov personally responding to the challenge of shutting down the young Canadian star.
Despite the addition of the young hotshot, the Racers struggled out of the gate and at the gate. Gretzky had a slow start, but famously scored his first professional goal in a home game against the Oilers, and added a second just eight seconds later. (I still remember Rod Phillips' description from Market Square Arena.) The Racers were not scheduled to visit Edmonton until November 17, a date I had circled on my pocket schedule the day it was released.
Out of the blue on November 2, the incredible happened. Word filtered down that the Oilers' owner Peter Pocklington had completed a major deal with his former partner Skalbania to acquire Gretzky along with teammates Ed Mio and Peter Driscoll for the princely sum of $850,000. It was an out-and-out purchase with no players going the other way.
Such one-sided transactions were not uncommon in the Rebel League. Financial difficulties, bad debts and folding franchises were the rule rather than the exception throughout the league's turbulent history. Two years earlier the Oilers had briefly acquired seven members of the Minnesota Fighting Saints (a.k.a. the "Folding Saints") including Dave Keon and Johnny McKenzie, only to have the deal mostly fall through when the famous vets turned up their noses at Western Canada and forced a second deal to New England Whalers. So while the first reaction to the Gretzky purchase was overjoy, the second was trepidation; would Edmonton be snubbed yet again?

By the suppertime news, Gretzky was already in town, after an eventful charter flight in which the destination was unknown while Skalbania dickered with Michael Gobuty of the Jets (who famously chickened out of a game of backgammon) before closing the sale with Pocklington. Eddie Mio paid for the flight on his own credit card ... such was the precarious state of finances in the WHA.
The following night Gretzky made his Edmonton debut, scoring his first Oiler goal in a game I was obliged to miss due to a prior commitment which took me out of town. The Oilers themselves then went on the road, returning, ironically enough, for that game against the Racers that I had been so eagerly anticipating. To see the hotshot in the home whites was too good to be true.
I couldn't take my eyes off the Kid that night, in fact I quickly fell into the long-term habit of keeping an eye on him every moment he was on the ice. He did odd things, standing off to the side of puck battles and then pouncing on the loose biscuit, or occupying traditional dead zones of the ice and picking off stray passes and shootarounds. His anticipation was otherworldly, his stick skills magical from the get-go. His skating, not so much. But you could see from the stuff that he tried, that when he got stronger on his feet he would be hard to stop.
The Oilers cruised to a 4-0 first-period lead against the overmatched Racers, with Gretzky popping a garbage goal on a rebound. From there the game became a desultory 6-1 affair, with one shining exception. Attacking my end of the rink on a second period powerplay, the Oilers were going precisely nowhere and the Racers iced the puck again and again. Gretzky was growing frustrated and his face flushed (something my season ticket buddies and I soon learned was a VERY good sign). By the second or third icing Gretzky, playing the point, turned on the burners and raced down to his own end to retrieve the puck. He slapped his stick on the ice a couple of times to encourage Dave Dryden to simply leave the puck for him, and by the time he circled back with it he was in top gear. Crossing the Racer line he encountered the two penalty killing forwards, slipped the puck past them and avoided a check by leaping and spinning in the air, a move which I don't think I ever saw again. (Turned out he had a few others.) Landing on his feet and through the hole, Gretzky took a couple of steps, wound up and leaned into a slapshot which found the top corner of the net. I will never forget the the moment of silence that it took the people in the crowd to process what they had just seen, not just the whizzy move but the end result, the puck in the net, the red light on, just out of nowhere. Then the place, all 8 or 10,000 of us, erupted with a frenzy of cheering unlike anything I had experienced to that point. What a moment.

Gretzky went on to score 110 points, finish third in WHA scoring and decisively win the Rookie of the Year award against a bumper crop while leading the Oilers to a first place finish and a berth in the Avco Cup finals. While some NHL chauvinists ascribed his success to weak competition, fact was those 110 points remained the Great One's lowest output as a professional until 1992-93.

One other highlight of that first game didn't come into focus until much later. After trading three major assets to the Oilers the Racers had holes to fill on the roster. One of the newcomers was another 17-year-old, a local lad named Mark Messier. Thus I had my first view of the two most famous Edmonton Oilers on the very same night.

The unpolished Messier did little that night to really catch our eyes. He was lightly enough regarded that he lasted into the third round of the following year's NHL Entry Draft, long after his WHA contemporaries Ramage, Gartner, Vaive, Hartsburg, Goulet, Gingras and Riggin were selected. Indeed the WHA itself finally gained entry into the NHL that summer, as merger negotiations were finally successful. Gretzky himself avoided the draft altogether, having been signed by the crafty Pocklington to a personal services contract, and finessed into the NHL as an Oiler. Within five years Gretzky, Messier and Pocklington completed a rapid ascent to the ultimate goal, the Stanley Cup. But that's a story -- more than one actually! -- for another day.