Stockton Thunder Update and Around the NHL

Share All sharing options for: Stockton Thunder Update and Around the NHL 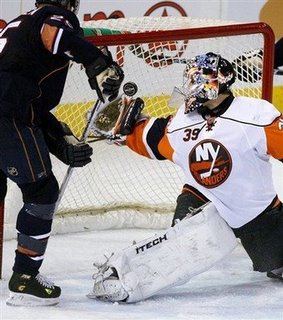 The Thunder are 2-3-0 through five games, but it isn’t all bad news, as a number of Oilers prospects have played extremely well.

Take Bryan Pitton as an example. Pitton posted a 2-1 record, playing three games in three nights and four in five, and currently has a 2.53 GAA and 0.919 SV%, numbers that put him on the same pace as Devan Dubnyk had in his rookie year (2.56 GAA, .921SV%). The news hasn’t been so good for Pitton’s goaltending partner – Andrew Perugini has had visa issues and won’t be eligible to play until October 31st in Las Vegas.

Rookie pro Bryan Lerg, sent down last week to get some playing time, has been exceptional, with five points in four games. 5’9" right wing Justin Chwedoruk has also impressed, with four points in five games and a +4 rating. Read more...