Savard Can't Argue That He Didn't Get A Chance: They Gave Him Four Whole Games

Share All sharing options for: Savard Can't Argue That He Didn't Get A Chance: They Gave Him Four Whole Games 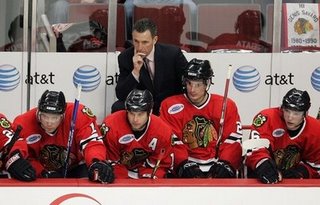 Pierre LeBrun broke the news this morning that the Chicago Blackhawks have fired head coach Denis Savard, fresh off a 4-1 win against Phoenix.

Chicago has a 1-2-1 record, which doesn’t seem like anything to get panicked over (as opposed to, say, the Ducks’ record). Regardless, when a coach is fired four games into a season, there aren’t a lot of possibilities as to why. Savard’s record this season certainly hasn’t been bad enough or prolonged enough to be fired over, so either Wirtz/Tallon/Co. are insanely trigger-happy, or something behind the scenes led to this.