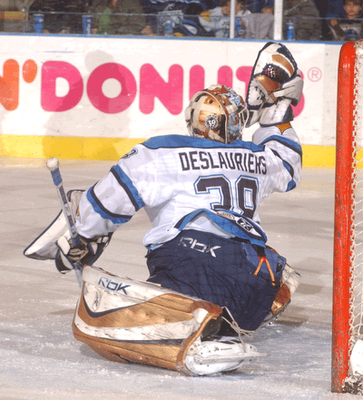 The road to the NHL is an arduous one, and all but the supremely gifted must spend time honing their craft in lower professional leagues. This is particularly true of goaltenders. The developing goalie of most interest for Oiler fans is currently Jeff Drouin-Deslauriers (pictured), who played his first NHL game on Friday night, beating the Flames 4-3 right in the Saddledome.

Towards the end of yet another lengthy thread over at Lowetide, the discussion turned to NHL projections of goalies based on minor league performance. My No.1 fan Slipper posted a number of examples of goalies who had performed at a high level in the AHL before making the link. He concluded:

I really think some where in the range of .920 by the age of 23 seems like it could be the line … that deadline where a goaltender either gets it or not

I decided that rather than "typing guys in randomly over at hockey-reference.com" I would do a little more thorough study. Looking over a current list of NHL goaltenders I found about three dozen who had played at least 100 games in one of the high minor leagues (AHL and/or IHL). I might have missed one or two but I think I got most of them. I listed their career GP and Sv% in their primary minor league, their Sv% and age in their final minor league season of 20+ GP, and then their GP and Sv% in the NHL. It’s an interesting list:

(Note: Two guys played over 100 games in each high minor league so both lines are listed; a third, Kevin Weekes, clearly made a career leap in a briefer stop in the "I" which it would be disingenuous not to mention. Otherwise I made no attempt to blend in the occasional few extra games in the "other" league)

First things first: there's no Brodeurs, Luongos or Lundqvists to be found here. Those guys were correctly fast-tracked to the bigs. No diPietros or Fleurys either. A couple of near misses like Lehtonen (98 GP), Kiprusoff (87 GP) and Vokoun (78 GP) were omitted. Meanwhile, a guy like Olaf Kolzig played his 139 AHL games before they kept Sv% stats in that league. It follows that some of the career minor league Sv% for the older guys may be incomplete.

Now I don't know the current formula for projecting NHL performance for goaltenders -- and I'm not about to pay "Rotowire" to see an archived copy of Behind the Net's valuable research to this end, whazzup with that? -- but surely the expectation would be for a goalie's Sv% to drop. So it is with (only) about 70-80% of all cases. Turns out there's a couple guys who have posted better numbers in the NHL than they did in the minors (Ellis, Fernandez, Giguere, Lalime, Legace); although in the majority of those cases the guy was around his now-established NHL level in his last season in the minors. Ellis is the exception that came right off the board; his .924 that led the NHL last year was .013 better than his best minor league season. Wanna bet on a repeat?

There's quite a few more who are pretty much level (+/- .002, including Bryzgalov, Johnson, Leclaire, Mason, Roloson, Theodore, Toskala, Valiquette so far). So that's fully a third of the entire list whose Sv% stats stayed about level or better, at least relative to their career rate. In about half of these cases the guy had a great last year in the minors. In summary, 11 of the 37 goalies have a better or equal career Sv% at the NHL than in the minors, and 8 maintain a higher average than their last season at the minor pro level.
As for the magic markers: only 12 of 37 recorded a Sv% of .920 or better their last year of 20+ GP in the minors. Another 10 were in the .915-.919 range. So while .920 is certainly nice, it's not necessary. On the other side, fully 12 of the 37 had a sub-career-rate Sv% their last year in the minors.

As for the age of "getting it", a lot of these guys were still buried in the AHL well beyond 23, with many of them gradually improving to somewhere near the .920 level (Anderson, Dubielewicz, Garon, Leighton, Mason, Raycroft, Roloson, Tellqvist, Thomas) before "earning" their chance at whatever age. At the NHL level this group has had varying degrees of success, although it’s fair to say none of them can be considered among the top tier of goalies in the league. Thomas was on the outer boundary of the top ten goalies since the lockout in this blog’s first look at the state of goaltending in the NHL, while Roloson likely* achieved similar status just before the lockout. (*I haven’t done the actual study, but with Sv% of .927 and .933 in 2002-04, Roli was rolling.) Averaging out the entire list, they played their last "full" minor league season at age 25. Just 12 of the 37 (including, speculatively, Deslauriers) were essentially done with the minors by age 23. Only two goalies on the entire list -- Marty Biron and Josh Harding -- met the double standard :) of their last minor league season by 23 with a Sv% of .920; another seven achieved .915 by that age and then graduated, so maybe that's a more achievable "line in the sand". But it's still faster than most.

Looking across the board it's hard to find a common thread. For every general rule there's a solid minority of exceptions. For every Marty Biron, Jose Theodore or Josh Harding who dominated the minors at an early age, there's a Dan Ellis, Manny Legace or Chris Mason who took years to "get it". Oiler fans will note that both Dwayne Roloson and Matthieu Garon fit the "late bloomer" description, as indeed do former Oiler prospects Tim Thomas, Steve Valiquette and Ty Conklin.

As for the youngster currently challenging the veteran Oilers, JDD's AHL Sv% of .912 in 2007-08 is slightly below the mean graduating level; but bear in mind that at 23 he would be among the younger 100+ GP guys to successfully make the jump. Considering this, it would neither surprise nor disappoint greatly if he remains one year away. It would, however, be disappointing to lose him on waivers at this point; his improvement from .888 to .897 to .908 to .912 has been steady, especially considering some of the chaos in the Oilers farm "system"; if he spends another year raising that into the .915-.920 range that would be just fine.

It is incumbent on me to point out that such studies are rife with ambiguities. For one thing, this one is incomplete in that it excludes the guys who didn't need 100 games apprenticing in the minors, most of them top line goaltenders. For another, Sv% may be the best available measurement of goalies, but it's far from perfect. Much depends on team play. Some of these guys may have parachuted into a cushy situation at the NHL level (e.g. Legace, Turco, Mason, Ellis), while others were thrown to the wolves (LaBarbera, Niittymaki, Tellqvist); similarly some no doubt came from great defensive minor league clubs and some from not-so-great (I didn't pursue this, but the goalie's own W-L record would be a strong clue). One might expect such transitions to trigger a similar effect as what happened to Mike Smith last year when he got traded from Dallas (.906) to Tampa (.893), but that in itself is a topic for further research, and for another day. For now I'll throw this information out there and let you draw your own conclusions, which I certainly welcome in the comments section.