Share All sharing options for: Oh, Right, The Error 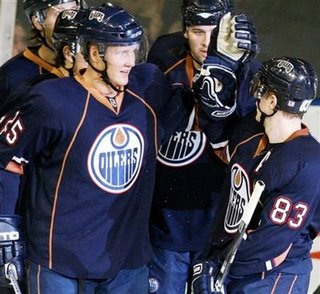 David Staples over at Cult of Hockey is known for a few things around the Oilersphere. He's known for coming up with alliterative nicknames for Oilers' players ("the Flying Fridge" and "Mean Matt Greene" come to mind). He likes to run old newspaper articles to give perspective to current events. He follows the politics of blogs and message boards far more than most MSM-employed folks.

Still, this isn't his primary claim to fame. Over the past year, David Staples has reviewed every single goal against the Oilers and assigned an error to players that he feels were responsible. He's also been mentioning them everywhere, all the time, and it's hard not to admire his enthusiasm, or at the very least, his doggedness. His views of players have been profoundly influenced by his work - Joni Pitkanen, pictured above, is one of his frequent targets.

I've been pretty neutral about the error; I decided I'd shadow Staples' work this year in an effort to come to an informed conclusion. Two games in, I've given it up, because I don't buy the statistic. The reason for this is what Staples' recently called the "disequilibrium theory" (borrowed from Ken Dryden's excellent book, The Game, which taught me French swearwords at a young age).

Where do you start? Does a poor forecheck start the play? What about losing the faceoff? I don't think that a line can be drawn saying that three of the five players on the ice were responsible, while the other two were not. Tracking errors the last two games, I've confirmed that opinion. Goals are scored against a five man unit; there are no innocents.

Best of luck to Staples with his project - it's a lot of work and very ambitious, but I don't think it provides a better picture than GAON/60.