A milestone for a personal favourite

Share All sharing options for: A milestone for a personal favourite 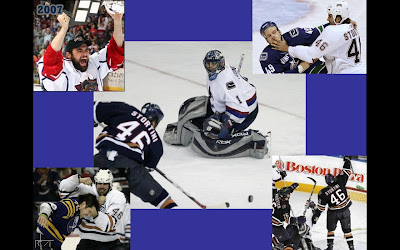 The featured photo at the centre of this montage shows Zack Stortini in the act of scoring his first NHL goal, against Roberto Luongo of tonight's opponent Vancouver Canucks (celebration at lower fight). Tonight Stortini will achieve a second career milestone against this hated divisional rival when he plays his one hundredth NHL game.

That is one hundred more games than we Oiler fans had any right to expect when the Oilers drafted this guy deep into the third round of the 2003 Entry Draft. Yet today Zack Stortini and Alexandre Picard become the first two players of the 33 picked in that round to reach the 100-game plateau.

Stortini had some positive vibes when he was picked. Hockey's Future noted the following: "Captain of the Sudbury Wolves of the OHL for the past two seasons. Named two years in a row as the team's Academic Player of the Year... Pledged to lead Sudbury to the postseason in 2003-04 and delivered, then guaranteed a win in round one and scored the game winning OT goal to complete that objective too." Hmmm, smart kid, leadership skills (two year captains are rare in junior), and by example too.

He also had a skating stride that might have been the most awkward seen in these parts since Wayne van Dorp briefly cast anchor. Never one to shy away from hard work, Zack has undertaken powerskating instruction under the watchful eye of Liane Davis and has gradually improved, summer by summer, winter by winter. He's still an awkward, below average skater, but he is gradually gaining speed and agility and now wins his share of races to shoot-ins. If he arrives second, that's not always a bad thing either.

Stortini made his debut with the Oilers as a very raw rookie in 2006-07. The highlight was a great game against the hated Canucks . That Zack likes to get in the faces of the Canucks can be seen in the pic at upper right; he has a personal high 6 fights against various members of the Canucks.

Thanks in part to a late-season injury bug, Stortini finished that 2006-07 season with 29 NHL GP before joining the Hamilton Bulldogs in the post-season and becoming the only non-Hab property to contribute to that Calder Cup championship club (see pic on upper left).

Zack continued to overachieve in 2007-08. After shuttling between the fourth line, the pressbox, and Springfield in the first part of the season, another injury bug together with his usual inspired play saw Zack play all but one game in the sceond half of the season, leading the team during that span with an impressive +10 rating (+19/-9). After limited minutes in a difficult first half, he responded to a well-defined role, contributing 8-12 minutes a night of solid 5v5 grinding. His defensive contribution was extraordinary, as he trailed just his linemate Curtis Glencross for the best GA ON/60 rating. Adopting a dual role as the team's primary agitator and its enforcer, Zack finished 2nd on the team with 99 hits despite being 20th in total ice time. He also finished second behind just Ales Hemsky in drawing penalties per unit ice time. Further, he led the club by a wide margin with 201 PiM including 23 fights, many of which were against true heavyweights like Derek Boogaard, George Parros, David Koci, Colton Orr, Darcy Hordichuk, Eric Godard, Raitis Ivanans, and Andrew Peters (pictured at lower left). A willing but awkward dance partner, Stortini's game (and mouth) is probably better suited to the agitator's role, but he will stand in there for his teammmates and against Anybody. Anybody who takes liberties with Ales Hemsky, be they Martin Lapointe, Robyn Regehr, or Derek Boogaard, could expect a visit or two from Zack Stortini.

In 2008-09 Oilers have finally acquired a true heavyweight in 6'6, 265 lb. Steve MacIntyre to relieve Stortini of that part of his job description. Zack has had some early struggles with greatly reduced ice time which has seen him stapled to the bench or press box. He seems to need regular, if limited, ice to be his most effective. While the team's toughness is maximized with both big fellas in the line-up, that represents new challenges to MacT. For Stortini's line to be effective, he has to be the least skilled player on it. That's no knock on Zack, but he's got to look after his own job and count on his linemates to be able to do likewise. He and Brodziak/Pouliot are nowhere near good enough to carry an anchor around with them, leaving MacT few options but to staple 1,2, or all 3 guys to the bench. A 3-pack of Zack, SMac and Brodziak would pack some whack but lack at the back and attack jack. :)

But while MacIntyre is a true enforcer in the "nuclear deterrent" sense, Stortini is far more versatile; he provides physical presence in 5v5 play than guys like Hemsky and Nilsson can provide in a month of double shifts. The fights spring out of that physical style, but I'm more interested in hits and grinding the boards and getting in the goalie's face and distracting the other team and drawing penalties. That's hockey, all of it is hockey, and it's every bit as integral to a good team as tallying up scoring chances, however you may define them. To have a good safe player who does all those things for 8 or 10 minutes a night is a huge asset. Especially one who just turned 23 and has done nothing but improve since the day he was drafted.