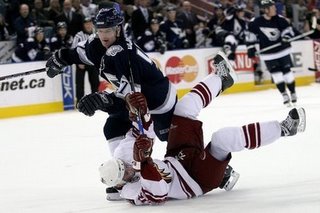 Because I know so many of you are interested.

Bergeron was acquired from the Anaheim Ducks for a third round pick and thus far has been the Minnesota Wild's #5 defenseman. He's also playing a major role on their powerplay (averaging 4:21 a night so far), and that's probably going to continue given that Marek Zidlicky was placed on injured reserve today.

He's got 1 goal and a -1 rating through two games, which fits nicely with the player I remember. If there's any truth to the rumours that Pittsburgh and Minnesota are talking trade, it wouldn't surprise me if he was included. The guy can put up points, whatever his other flaws.

And right about now, the Penguins could use a blueliner with that particular skillset.