Share All sharing options for: Game On ... for real, finally 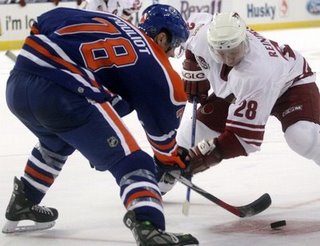 On the ninth day of the NHL season, and the fourth day since pucks started dropping for keeps in rinks all over North America, tonight the Oilers become the 30th and last NHL team to play a real game. Happily for old-timers like me, they've broken out the traditional blue-and-orange uniforms for the occasion of opening their 30th anniversary (sic) season.

With the belated start the Oilers are already 8 points back in pursuit of the President's Trophy. That it's Glen Sather's Rangers that are leading the way is all the reassurance we need that the season is indeed very young. But it's about goddam time the season actually got underway for all of its participants.

No doubt these rest days would have come in a lot handier at other points in a season in which the schedule maker has done us zero favours. A nice enforced rest to start the season, followed by what seems like a two-month road trip, including most egregiously of all, an Oilers-at-Rangers game scheduled DURING Glenn Anderson's HHoF induction. The marketing whizzes at the NHL office have their heads lodged so firmly up their arses they'll need a crowbar to get them out. But that's a rant for another day (consider the foregoing a down payment :).

Tonight, alas, I get to watch just the first period before heading off to work. The PVR is in good working order, programmed and ready to go, but a time-delayed broadcast is another degree of separation on an occasion when every red-blooded Oilers' fan wants to be in the building, cheering on the start of another new season. Those of you lucky enough to have a ticket, enjoy yourselves! I've seen my share of home openers ... more on this tomorrow.

1. "SMacIntyre" coming out of nowhere to make the 23-man roster. I guess if you replaced SMac's name with "little-known enforcer" it's not that surprising. In the two years since Big Georges left town the Oilers' "team tough" mantra has failed. The team hasn't exactly been pushed around, but they have suffered more than their share of injuries, some of which (Moreau's and Souray's shoulder injuries) were sustained in the name of team toughness and some of which were caused by other teams "enforcers" (Jody Shelley, Derek Boogaard) who weren't otherwise occupied. I'm not saying it's right, but I can understand why the organization was looking for a hired fist.

2. Strudwick leapfrogging Smid in the depth chart and dressing for the opener. Props to Lowetide for calling this one pretty much the day Strudwick was signed. I too like Strudwick, and have since he played for in Vancouver -- at this point in his career he's the ideal seventh defenceman; tough, experienced, reliable. But I'm disappointed that Smid's play in camp didn't inspire confidence; I was, and am, hoping for a big leap forward in Ladi's play in 2008-09. This is not a promising start.

3. Pisani still playing centre. By placing three veterans on the third line and three youngsters on the fourth, MacT has clearly stratified the lines. This will likely play out in TOI, where it will be relatively easy to shorten the bench in close games. I like the four-line strategy myself, but I also like winning, so I'll have to trust Coach MacTavish to maximize his roster to that end.

1. The demotion of Rob Schremp. Robbie's game is suited a Top 6 position, and with Penner already waiting in line there's just no room. Too bad, really, but 2007-08 was his window, and a whole bunch of kids -- Nilsson, Cogliano, Gagner, Brodziak, arguably Penner -- sailed right past him.

2. The demotion of Gilbert Brule. The youngster showed quite a bit, but after two years of playing just 10 minutes a game in Columbus he needs more ice time than he would see in a 12/13 role here in Edmonton. Hopefully he'll see closer to 20 minutes in all situations in Springfield, and earn his recall in due course. This formula worked pretty well for Pouliot last season.

3. The inability of Marc Pouliot (pictured) to seize the 3C role. Props to the kid for making the team out of the gate, but I agree with most on the 'sphere that a straight switch of Pouliot for Moreau would balance those two lines while allowing everybody to play his natural position. Unfortunately it seems Poo still hasn't fully won MacT's trust.

All that said, the MacBlender could come out early and all that hand-wringing come to naught. However they line up, they'll be wearing the blue and orange (yippee!), so it's GOILERS!