Share All sharing options for: Friday Night Battle of Alberta 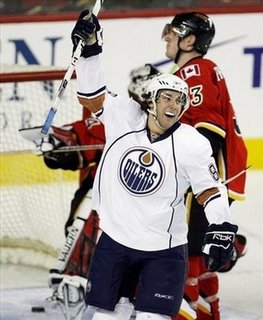 Sam Gagner scored six points in eight games against the Flames last season and should be a key player again tonight. Given that the Flames have a phenomenal first line, a nearly invisible second line, and an energetic checking unit, the second line matchup may be the most important from an Oilers perspective. Not quite as important as the Jeff Drouin-Deslauriers vs. The World matchup, but important all the same.

Excellent Flames blogger Kent W. has his predicted matchups, and I think his second suggestion (featuring traditional use of a checking line) is what we'll see tonight. I don't think Cammalleri and Co. have the ability to outplay the kids, and I think the checking line will be just fine against Iginla. However, I also think Iginla will see some time against the Kid Line, because that's the way MacTavish rolls these days, and I'm curious as to what the result will be. With Steve MacIntyre "playing" tonight, MacTavish should be able to sneak Hemsky or Kenta's kid out against the Primeau line, and that could be very significant. It will, however, be a shame not seeing Stortini draw guys like Sarich and Regehr into the penalty box with him. Such is life.

- Matt Greene's been signed to a five-year extension in Los Angeles, and good on him. I don't think he brings a ton of irreplaceable stuff to the ice, but he always seemed like a solid guy, and it's nice to see him and Stoll get some job security in L.A.

- Which coach is in the most danger right now? All of Barry Melrose, Randy Carlyle and John Stevens could be, but my money's on Stevens. Still, Tampa Bay's management seems a little on the trigger-happy side, so it's hard to be sure.

- Kudos to Rob Tychkowski for apologizing for some non-trivial errors in his column yesterday. They were completely understandable mistakes, and unlike most of us, when Tychkowski makes an error, everybody sees it. He's a good reporter, and deserves some slack here, in my opinion.