Edmonton vs. Colorado: Before and After

Share All sharing options for: Edmonton vs. Colorado: Before and After 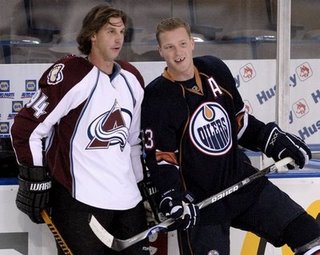 I did a couple of articles on the match-ups that MacTavish/Granato would be going with during game one last night, one before, and one after the game.

- Dustin Penner, by my eye, through one game, looks much better than he did a year ago. It wasn't just the two goals (although, those were good too); he was much faster (winning races to the puck, negating icing calls) and looked very good on the penalty kill. I think he moves up to the first line by the end of the month.

- Despite the number of saves, I was a little worried about Garon's play last night. He had a huge dose of luck, and looked frantic. Frantic is a bad thing.

- As worried as I am about Garon, if 77-37 haven't got things turned around by the ten game mark, I'll be very, very worried about the defense.

-And finally, one for myself: it's only one game. And, not trivially, they won.