Share All sharing options for: Duck Lines and Flying V's 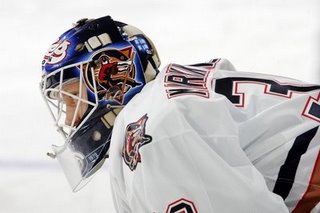 On November 28, 2001, Jussi Markkanen made his first career NHL start, in Anaheim. He made 27 saves en route to a 2-0 shutout victory. He has a dominant career record against the Ducks (5-1), and if he were the Oilers backup goalie I’d start him there tonight.

Mathieu Garon, tonight’s likely starter, has a 5-9 career against the Ducks (NHL.com will tell you it’s better than that, but then again, they believe that a shootout loss deserves its own column). Of course, I’d imagine that most of those games were played as a member of the Los Angeles Kings, and that isn’t conducive to a good W-L record. Speaking of those same Kings, they had their first win of the season last night, a 6-3 victory over Anaheim. How did Randy Carlyle deploy his players last night?