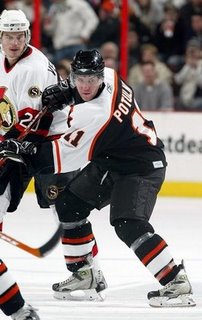 There were a lot of intriguing players in training camp at the start of this season. Bryan Lerg, a favourite of Lowetide's, impressed but ended up unable to get into action in the AHL, and is now with Stockton of the ECHL. NAHL bruiser Guillaume Lefebvre showed some muscle in his preseason games, and has a professional contract to show for it. Theo Peckham got a tremendous push on the defensive side of things, while Taylor Chorney hung in until nearly the end ot training camp as well.

The race that was probably the most interesting was the three-way battle between Gilbert Brule, Rob Schremp, and Steve MacIntyre. MacIntyre won it, but with the Oilers carrying three goaltenders, and players starting to get hurt (Gagner's day-to-day, Pisani has back spasms, and Shawn Horcoff took a big hit towards the end of the Colorado game last night), I think it's reasonable to question if another forward might be called up in the near future.

Here's the stats lines of Brule and Schremp:

Brule took a knee-on-knee hit last Friday and hasn't played since, although he was initially expected to return to action this weekend, so he's probably close to being back.

There is, however, one player who got surprisingly little preseason game time, a guy who's still young enough to be a prospect, and a guy who has had an NHL job in the recent past.

Don't look now, but Ryan Potulny has scored 5 goals in six games and posted a +2 rating for the Springfield Falcons.