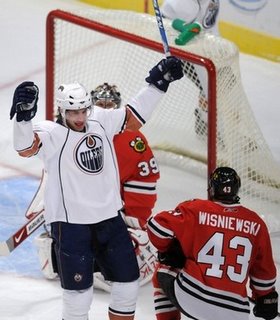 A common refrain among fans of all stripes, and probably in all sports for that matter, is the need to "play the kids". In this same vein comes a theory that’s espoused by a whole bunch of people, a theory that works something like this:

If a team has an obvious hole and the only options to fill it are either under-qualified veterans or unproven prospects, it’s in the organization’s long-term interest to give the job to the prospect.

There’s nothing obviously wrong with that statement. Clearly, wasting a roster spot on a veteran who can’t keep up is a worse solution than investing it in a player on the upswing of his career; both players will make mistakes, but only one player is going to come out of it better.

The unmentioned third option is acquiring a veteran who can clearly carry the load. It’s probably unsurprising to people who read me with any amount of regularity that I strongly feel that the unmentioned third option is almost always the right one. Sometimes, it’s simply not possible (cap/budget constraints, too many holes, holes that are too big, etc.), but as a general rule, I think it’s the way to go.

Moving out of the abstract, let’s look at the Oilers’ situation in particular (i.e. the third line centre position). Read more...